U.S. Marriage Rate Lowest Ever Recorded, But Headed Down Slower

The U.S. Marriage Forecast published by Demographic Intelligence forecasts the changing face of marriage by age, income, eduction and ethnicity. 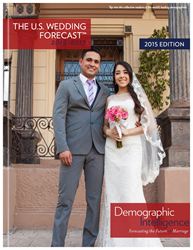 Marriage rate in the U.S. is predicted to fall to a low of 6.74 marriages per 1,000 population this year.

“Even though we have seen a modest recovery in the economy, the marriage rate continues to slowly decline,” said Sam Sturgeon, Ph.D., president of Demographic Intelligence. “A variety of factors—including sluggish job opportunities for the less educated, and declines in American religion—account for the American retreat from marriage.”

Drawing on an extensive analysis of demographic, cultural, and economic trends, the new report from DI provides detailed projections of U.S. marriage trends in 2015, 2016, and 2017 by income, education, age, race, and ethnicity. Three findings from The U.S. Wedding ForecastTM are particularly noteworthy:

Declines in marriage are being driven by four factors, according to Sturgeon:

1)    Men without college degrees have seen their real income, and the stability of their jobs, fall in recent years. This reduces their marriageability.
2)    Men and women are postponing or foregoing marriage in larger numbers, partly because they have less faith that marriage is permanent.
3)    Cohabitation has emerged as a competitor to marriage, insofar as it offers intimacy and the opportunity to have children without requiring the same level of commitment.
4)    Young Americans are less religious than are previous generations, which reduces the importance of getting married, including before children come along.

The forecast also provides some evidence, however, that the retreat from marriage in the United States is slowing. Sturgeon noted that the pace of decline in the marriage rate has slowed in recent years, and that the share of births outside of marriage has stopped growing since the Great Recession.

“This report fills a critical gap for executives and analysts working in the wedding industry,” noted Dr. Sturgeon. “DI’s projections are particularly important because the economic and cultural drivers of marriage are changing so much today. Thus, Demographic Intelligence gives companies a clear sense of the demographic road ahead.”