Boxing Legend Statue Soon to be Created by Big Statues 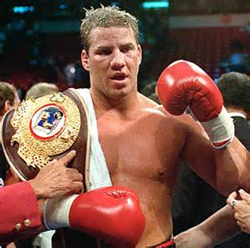 The ABA wants the fight of Tommy Morrison to live on and have decided to immortalize him in bronze.

Tommy Morrison had an incredible boxing record of 48-3-1 with 42 knockouts. The highlight of his career being in 1993 after defeating George Forman and winning the WBO heavyweight title. Morrison was also casted in Rocky V as Tommy Gunn where he became friends with Sylvester Stallone and gained much of his fan base. Tommy's career came to an abrupt stop in 1996 but his will to keep fighting in the ring never diminished. Tommy went on to fight twice more in West Virginia and Mexico where he won both bouts. Morrison passed away at the age of 44 in Nebraska in 2013 with his wife, Trisha, by his side.

The ABA is contributing to the fight of Tommy Morrison to live on and have decided to immortalize him in bronze. Matt Glenn of Big Statues will over see and create the statue making sure every detail is as the ABA desires. Matt comments on the project saying, "Growing up I was a huge boxing fan. I'm very excited to be involved in this wonderful project." The statue will be the bust of Tommy Morrison after winning one of his prized championship heavyweight belts over head. Plans are in the works to house the statue in Tommy's home town of Jay, Oklahoma. The emphasis of the statue will be to focus on Morrison's accomplishments in and outside of the ring.