Two addiction experts from Anaheim Lighthouse Treatment Center recently joined Dr. Marissa Pei on a CNBC radio podcast for a “state of the union.” The conversation centered on the root causes of addiction, the affect it has on the family, and how loved ones can seek an intervention. 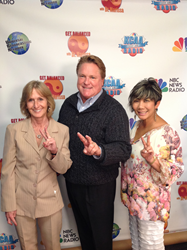 Some of the emotional and psychological causes of alcohol and drug addiction have their roots in low self-esteem, even though substance abusers often present a false sense of bravado.

Two addiction experts from Anaheim Lighthouse Treatment Center recently joined Dr. Marissa Pei on a CNBC radio podcast for a “state of the union” conversation focusing on addiction. Aired on KCAA AM 1050, the podcast features Tim Salyer, Anaheim Lighthouse CEO, and Deena Duncan, marriage and family therapist, as they discuss current statistics on drug and alcohol addiction, which is estimated to affect more than 23.5 million Americans. The program, titled “Addiction, Self-Hatred, Hope and Solution With Tim Salyer and the Anaheim Lighthouse,” provides information about the effects of addiction on individuals, families and society as a whole. The podcast, which also is interpreted in American Sign Language, is available on YouTube.

The program’s commentator cited statistics showing the cost of substance abuse in the United States at more than $600 billion annually in terms of family disintegration, productivity, health, criminal-related issues, loss of employment, failure in school, child abuse and domestic violence. Even though there are more than 15,000 addiction treatment facilities in the nation, only 11 per cent of people affected by addiction seek treatment. In addition to providing far-reaching statistics, the program explained some of the underlying issues that can result in addiction.

Duncan discussed addiction as a disease that affects brain chemistry, resulting in compulsive behaviors. She defined addiction as the continual repetition of destructive behavior, despite knowing the negative consequences that can result. Some of the emotional and psychological causes of alcohol and drug addiction have their roots in low self-esteem, even though substance abusers often present a false sense of bravado.

“Many times they have the point of view that they don’t deserve anything better,” Duncan said. Sometimes it comes from not living up to the standards of their parents or not feeling good enough as a child in school, or not really feeling good enough for who they were meant to be. When you start filling up their lives with more positive things and showing them what they can accomplish and showing them how they can make small milestones, then recovery can move forward.

In addition to education and statistical information, the conversation was a call to action for those seeking addiction treatment. Salyer and Duncan explain the process of intervention, in which family members can work with a professionally trained person in a carefully regulated process to encourage a substance abuser to seek treatment. Salyer said that more than 70 percent of the time, family members and friends contact treatment centers for information rather than the substance users themselves. He also understands that recovery is a process requiring patience and willingness.

“Sometimes people who start treatment don’t want to be there,” he said. “Sometime they will hear just one thing that resonates, and they want to learn more. Sometimes they will sit there long enough to get it. Only a few get it the first time. It doesn’t mean that treatment doesn’t work; it means they weren’t ready.” Salyer, a former criminal lawyer, has committed his professional life to helping addicts and their families turn their lives around.

About Anaheim Lighthouse
Anaheim Lighthouse is a drug and alcohol treatment facility located at 1320 West Pearl Street in Anaheim. It offers detox, residential, outpatient and sober living services. Its staff of highly qualified professionals is committed to providing a safe and drug-free environment for people who suffer from substance abuse. Additional information is available at http://anaheimlighthouse.com or by calling (877) 959-5909.