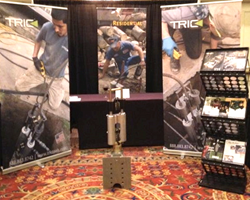 It was definitely worth waiting for

Pipe bursting manufacturer TRIC Tools, Inc. enjoyed its recent participation at Mr. Rooter’s 45th Annual Reunion in Pt. Clear, Alabama April 14-15. Director of Sales, Gregg Abbott represented TRIC Tools at The Reunion that took place the Grand Hotel Marriot Resort and Spa. Although the Reunion was brief it wasn’t without its share of excitement. The local depot for the carrier that moved the freight was overbooked with work and wasn't going to get the trade show booth to the event in time. Mr. Abbott had a good sense of humor about it and was able to get most of the Mr. Rooter owners to return in the morning when the booth had arrived.

Mr. Abbott said, “Everyone who came by asked me where my booth was and I told them to come back in the morning to see the magic of TRIC. They laughed and came back and I was able to show our X30 and some of our latest technology.” Premier Logistic Solution's Bob Joseph contracted another carrier to deliver the freight in a pickup with a tarp strapped over the top of the crate and delivered the freight in the pouring rain in order to arrive before the event ended. "Bob always goes the extra mile for us, and we really appreciate his efforts," continued Abbott. Central Pennsylvania’s Mr. Rooter Paul Nelson who came back after the freight arrived added, “It was definitely worth waiting for.”

Mr. Rooter’s story started in a lone store in Oklahoma City, OK in 1970 and later became a franchise success. Mr. Rooter’s original focus started with drain cleaning and now has branched out to include a variety of plumbing services. Some of these services include commercial and residential plumbing, drain cleaning, video inspection, and trenchless pipe replacement including pipe bursting. For a more complete listing of services please refer to their website at http://mrrooter.com/services. Since the early 70s Mr. Rooter has grown to over 250 franchises across the US and Canada.

Gregg Abbott enjoyed meeting some longtime TRIC pipe bursting equipment owners in Point Clear such as Vermont’s Keith Godbout, San Diego’s Mike Lee, Oakland’s Steve Ferguson and San Bruno’s Larry Verna. “Larry was one of our first Mr. Rooter customers in the Bay Area and always has been great proponent of our technology,” said Mr. Abbott. Gregg was happy to point out that there were a few new Mr. Rooter’s that also have begun to re-evaluate the need for pipe bursting equipment. Headlining the event as the Keynote speaker was New York Times bestselling author, internationally acclaimed speaker, and business consultant Matthew F Kelley.

TRIC invented and patented the first Lateral Pipe Bursting System while simultaneously gaining national approval of HDPE pipe for its use, thus opening the market for trenchless home sewer replacement in America.

For more information about Trenchless Pipe Bursting equipment or the Trenchless Industry in general - please call 888-883-8742 or visit TRIC's website at http://www.trictrenchless.com to see how they can answer any of these questions for you. Get your Trenchless Sewer and Water Replacement service off on the right foot, one lateral at a time.