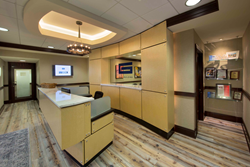 The 10,000-square-foot, state-of-the-art Fort Lauderdale headquarters of Gulf Building, which was recently named as one of the Top 25 General Contractors in South Florida.

We are thrilled to have made the list and be named among the top players in the general contracting industry in South Florida.

Gulf Building LLC—South Florida’s premier provider of construction management services, both commercial and custom residential—has been named as one of the “Top 25 General Contractors” by the South Florida Business Journal for 2014. The longtime Fort Lauderdale-based builder came in at number 22 on the publication’s annual industry rankings, with $21.87 million in gross billings (South Florida) and $51.5 million in contracts awarded.

“We are thrilled to have made the list and be named among the top players in the general contracting industry in South Florida,” said John Scherer, president and CEO, Gulf Building LLC. “It is a true honor and testament to the stellar team we have in place, whose experience and dedication are the reason for our company’s continued growth and caliber of projects awarded.”

Gulf Building has consistently increased its revenues and net income since John Scherer took over the reins of the company as president and CEO in 2009. The company entered 2015 with a backlog of over $70 million in new work and a multitude of high profile commercial and custom-residential projects currently in the works. The financial growth and stability of Gulf, in combination with its focus on cultivating a positive work environment with an incredibly low employee turnover rate of less than 3%, and its mission of bettering employees and promoting from within is yet another testament to Scherer’s dynamic leadership abilities.

Scherer, together with the company’s executive team, have grown the firm from 10 employees in 2012 to over 75 as of current, with 20 new hires in the past four months alone. Additionally, the executive team’s forward-thinking innovations and implementations during the 2008-2011 recession enabled Gulf to overcome the economic downturn not just to get by—but to grow and come out on top. As a result of its recent growth and to meet the needs of the company’s expansion, Gulf Building recently returned to its original 10,000-square-foot headquarters located on the fifth floor of the Valley National Bank Building on South Federal Highway in downtown Fort Lauderdale (read more at SFBJ.com).

Founded in 1991, Gulf Building LLC provides an innovative, integrated and hands-on approach to and construction management, serving the greater South Florida market and beyond. Celebrating 25 successful years in business in 2015, the esteemed Fort Lauderdale-based builder maintains that improved timeliness is just as important as staying within budget, and that quality materials mean little without the expertise and skill to guarantee precision. To that end, Gulf Building holds itself to a higher standard than most other construction firms, not only in the work that it delivers, but also with regard to the employees in which the company invests. With a foundation based on integrity, quality and experience, Gulf Building’s detail-oriented, forward-thinking approach to construction management consistently generates end results that are on time, within budget and exceed client expectations. For more information, including a detailed overview of services and portfolio of past projects, visit http://www.gulfbuilding.com.