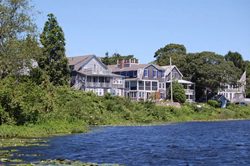 We look to the future together with confidence and enthusiasm.

United Camps, Conferences and Retreats has announced that the non-profit will assume management of Craigville Retreat Center, located in Craigville, MA on Cape Cod.

The Christian Camp Meeting Association (CCMA) has selected United Camps, Conferences and Retreats (UCCR) of Petaluma, California to take on operations of the Craigville Retreat Center (CRC) when the current lease with the Massachusetts Conference of the United Church of Christ (MACUCC) ends December 31, 2015. Earlier this year, the Massachusetts Conference decided to end the partnership with CCMA, which has been in effect since 1960.

UCCR, a non-profit cooperative established in 1970, currently manages 14 sites in Northern and Southern California and in Ohio, most of which are owned by religious organizations. Under the new management agreement, CCMA will become a member of UCCR with two seats on its board of directors.

Craigville Retreat, originally known as "Camp Christian", has been in operation since 1871 as a year-round site situated on a bluff overlooking Nantucket Sound. The center accommodates up to 200 guests in a variety of lodges and cottages.

“We are very excited by this new partnership,” said CCMA president Jim Lane. “We are convinced that UCCR brings the right combination of professional expertise and sensitivity to CCMA’s mission of providing opportunities for spiritual growth, worship, service, learning, fellowship, retreat and rest in a unique place of grace by the sea.”

Mike Carr, president of UCCR sent the following message to the CCMA, “We at United Camps, Conferences and Retreats are delighted to move forward in our partnership with Craigville Retreat Center! We look to the future together with confidence and enthusiasm while bringing a practiced acumen to the relationship. We are happy to add the CCMA to a longstanding group of church-related owners collaborating with UCCR to ensure all aspects of hospitality and management services are realized at these cherished properties.”

Lane thanked the Massachusetts Conference and the current CRC staff for their excellent work over the years. “Unlike many church-sponsored retreat centers, Craigville is in very good shape, with a business plan that is sustainable over time. CCMA is committed to continuing to serve the thousands of persons and groups who have used the center to strengthen their mission.”

UCCR has expanded its management services beyond California in recent years to properties in Ohio and now Massachusetts. All sites managed by UCCR are open to non-profits, schools, religious groups, and organizations for retreats, camps, meetings, reunions, educational and community gatherings. UCCR also provides program partnership to its facilities and owner group organizations through on-site support and the Web of Life Field School (WOLF). The WOLF School is an environmental education provider.