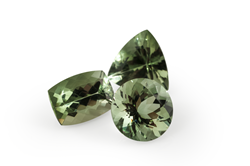 Our La Capilla(TM) gems are among those with the deepest color in the market today.

Jewelry Television (JTV) announced that the single Uruguayan mine that has produced some of the finest amethyst and citrine in existence has yielded yet another important gemstone, decadent green prasiolite. The 24/7 jewelry and gemstone shopping network will debut La Capilla Prasiolite™, during its annual Jewelry Fest event May 30 through June 7, 2015.

La Capilla Prasiolite™, which derives its name from the tall and slender amethyst crystals resembling the chapel steeples of Uruguay-Brazil, begins life as amethyst but is transformed into deeply saturated green prasiolite after a carefully monitored enhancement process. Once the rough crystals are mined and processed, they make their way to Brazil to be fashioned into stunning gems by renowned Brazilian lapidaries. Each gem has been examined and hand selected as worthy of carrying the La Capilla™ brand name, which is proprietary to JTV.

“Each gem personifies the finest qualities of prasiolite and is sure to surpass the expectations of the most discriminating gem lover,” said Jill Johnson, vp of marketing for JTV. “While a majority of the prasiolite gems in the market are a lighter, minty green color, our La Capilla™ gems are among those with the deepest color in the market today. It is only fitting that this gorgeous gemstone debuts as part of the tradition of our annual Jewelry Fest event,” noted Johnson.

“Less than 2% of prasiolite from this mine yields gems of such saturated color after enhancement,” explained Tim Matthews, Graduate Gemologist and CEO of JTV. “From 200 kilograms (roughly 440 lbs.) of rough material, only 3 kilos (6.6 lbs.) are designated La Capilla Prasiolite™ quality.”

For more information on prasiolite and other gemstones, visit JTV’s extensive Gemopedia.

About Jewelry Television® (JTV)
Jewelry Television® (JTV) is one of the largest multichannel retailers of jewelry and gemstones in the U.S. appealing to fashion-conscious women, jewelry-making enthusiasts and private collectors. The privately-held shopping network broadcasts high definition programing, 24 hours a day, seven days a week, to more than 80 million U.S. households. Committed to consumer education, the network employs numerous Graduate Gemologists and Accredited Jewelry Professionals. JTV.com offers the most comprehensive jewelry and gemstone Learning Library on the Internet, and is the third largest jewelry website according to Internet Retailer’s Top 500 Guide for 2012.