US Tamils to Hillary: We Were Tamils for Clinton Then, and We Will Support You Again

Tamils for Obama sent a letter on May 30, 2015 to former Secretary of State Hillary Clinton promising her their support when she runs for the Democratic nomination in 2016. 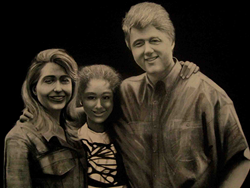 Portrait by a Tamil Artist

We are Tamils for Obama. We would like to remind you that before the nomination was settled in 2008, we were Tamils for Clinton. We are still here and eager to offer our support again.

"We love Hillary," said the Tamils for Obama press spokesman. "We loved her and supported her in 2008, and we will do so again."

A letter that Tamils for Obama sent to Mrs. Clinton on May 30 began "We are Tamils for Obama. We would like to remind you that before the nomination was settled in 2008, we were Tamils for Clinton. We are still here and eager to offer our support again. We were among your supporters before, and we haven't changed our minds."

Next, the Tamils wrote of their cherished wish. The letter said "Our highest goal is the establishment of a democratic and secure homeland for our fellow Tamils in the northeast of Sri Lanka. So far, this has not happened, but we have hopes for Obama's administration during the next two years.

"We also have high hopes that we will advance several steps toward the founding of a Tamil state when the Clinton administration takes office in 2017."