Let’s Just Be Clear Explains What, Exactly, a Purple People Eater Is

In a new blog post, the online writing and editing service explains why a missing hyphen has made the meaning of “The Purple People Eater” controversial since the song’s release in 1958. 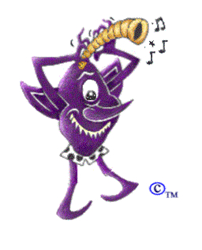 What is a purple people eater? Let's Just Be Clear explains.

In the 1958 Sheb Wooley smash “The Purple People Eater,” is the alien who comes to earth to join a rock-and-roll band a purple creature who eats people or a creature who eats purple people? This has been a hotly debated question for decades. In a new post, the grammar blog Let’s Just Be Clear points out that lack of clarifying punctuation has left the song’s meaning open to interpretation, and then digs deep into the archives to solve the riddle once and for all.

“If the title had been ‘The Purple-People Eater,’ the song would clearly be about an alien who eats purple people (a compound adjective modifying a noun). If it had been called ‘The Purple People-Eater,’ it would clearly be about a purple alien who eats people (an adjective modifying a compound noun). But the song’s title, ‘The Purple People Eater,’ doesn’t use a hyphen, so it can be interpreted either way,” explains author Laurel Shane in the blog post.

Most people assume that the alien is purple, including the makers of the widely panned 1988 children’s movie based on the song. But one verse of the song seems to indicate that the alien eats purple people:

I said Mr. Purple People Eater, what's your line
He said it's eatin' purple people and it sure is fine
But that's not the reason that I came to land
I wanna get a job in a rock and roll band

Which understanding is correct? Let’s Just Be Clear explores archived features about and interviews with songwriter Sheb Wooley to find out. Visit http://letsjustbeclear.com/blog/2015/4/30/what-is-a-purple-people-eater-anyway-thoughts-on-hyphenating-compound-words to learn the answer.

Let's Just Be Clear is an online writing and editing service.