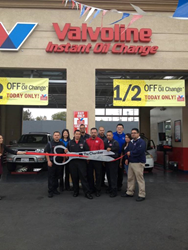 Valvoline Instant Oil Change equipped the service center with new signage and tools. They transferred a seasoned team of certified technicians to provide 15 minute oil changes to all its customers. They opted to convert the landscape to a desert layout to do their part in Southern California’s water conservation efforts. By doing this, they hope to cut the buildings water usage in half.

---
About Valvoline Instant Oil Change
Valvoline, a brand of Ashland Inc. (NYSE: ASH), has been serving American motorists longer than any other motor oil. With approximately 900 locations throughout the United States, Valvoline Instant Oil Change™ is a leader in serving the quick-lube market. Known for its fast oil change, they provide (certainly not limited to) transmission services, tire rotations, battery replacements, serpentine belts, along with wiper blade and light bulb replacements.