The Universal Life Church this morning called on President Obama to issue a full presidential pardon to all marijuana offenders. The pardon, were it to take place, would be the largest exertion of the power in history. The church's announcement heavily criticized U.S. leaders for their alleged hypocrisy in designing a justice system designed to unduly punish some marijuana users. In addition to a full presidential pardon, the church also urged State and Federal lawmakers to majorly revise existing marijuana enforcement policy. 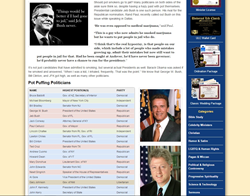 The ULC Calls for Full Presidential Pardon of Marijuana Offenders

...all individuals found in violation of marijuana offenses be offered a Presidential Pardon and, if currently incarcerated, released from prison.

The Universal Life Church, one of the world’s largest religious organizations, recently released a formal call advocating that all individuals found in violation of marijuana offenses be offered a Presidential Pardon and, if currently incarcerated, released from prison.

The announcement, published to the Church’s website the morning of June 3, was predicated on claims that many U.S. politicians were guilty of hypocrisy, highlighting either their direct or indirect involvement in the creation of a broken justice system.

More specifically, the Universal Life Church attacked the disproportional targeting and punishment of minor drug offenders and the larger ramifications of this injustice for society.

In its announcement, the Church went so far as to list the names and publish the photographs of a number of U.S. politicians who have allegedly admitted to marijuana usage, including current U.S. President Barack Obama, former Presidents George W. Bush and Bill Clinton, the late John F. Kennedy, and even conservative voices Ted Cruz, Sarah Palin, and Newt Gingrich.

The Universal Life Church claimed that its impetus in releasing these names was to make clear that a person who partakes of marijuana can still be a productive member of society, and should not be unduly punished with harsh prison sentences or marks on their record.

The pardon, were it to occur, would be the largest exercise of the power of presidential pardon in history.

In addition to calling for a full presidential pardon of currently incarcerated Marijuana offenders, the Universal Life Church also called on Federal and State Legislators to “hash out more reasonable and uniform punishments for a drug that is far less dangerous than alcohol.”

The organization did disclaim that they still believe that unlicensed sale of marijuana, and the operating of a motor vehicle while under its influence, should still be illegal.

The Universal Life Church is a religious organization that is known primarily for its provision of instant online ordination to visitors of its website. Operating since the middle of the last century, the Universal Life Church has claimed to have ordained over 20 million individuals. The Church frequently advocates for large-scale policy change to address social justice issues like race and income inequality, religious freedom, and gay rights.

Shield of the Universal Life Church