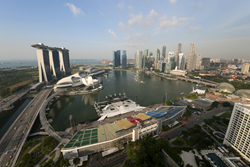 The Urban Land Institute (ULI) has announced six finalist projects in its global Urban Open Space Award competition, an annual competition that recognizes outstanding examples of successful large- and small-scale public spaces that have socially enriched and revitalized the economy of their surrounding communities.

“The submissions from this year are representative of how quality urban open space has become more than just an amenity for cities,” said jury chair Michael Covarrubias, chairman and chief executive officer of TMG Partners in San Francisco, California. “The international diversity of the projects is reflective of how developers continually work to meet global demand by the public for the inclusion of healthy places in cities.”

The descriptions of the finalists, with the project’s owner and designer in parentheses:

The winning project is scheduled to be announced at the ULI Fall Meeting, set for October 5-8, 2015 in San Francisco, California. A $10,000 cash prize will be awarded to the individual or organization most responsible for the creation of the winning open space project.

The six finalists were selected from an impressive collection of entries, representing urban areas from across the globe. While landscape architecture and urban design were factors in the judging, the jury selected finalists based on a broader set of criteria, including overall project design and how each impacted or revived their surrounding areas.

The award was created through the generosity of Amanda M. Burden, former New York City Planning Commissioner and 2009 laureate of the ULI J.C. Nichols Prize for Visionaries in Urban Development. In 2011, the Kresge Foundation, MetLife Foundation, and the ULI Foundation joined forces to continue the Urban Open Space Award through 2015. For 2015, ULI reaffirmed its commitment to the award and announced it would expand the program to global submissions.

To be eligible for the competition, an open space project must have been opened to the public for at least one year and no more than 15 years; be predominantly outdoors and inviting to the public; provide abundant and varied seating, sun and shade, trees and plantings with attractions; be used intensively on a daily basis by a broad spectrum of users throughout the year; have a positive economic impact on its surroundings; promote physical, social, and economic health of the larger community; and provide lessons, strategies, and techniques that can be used or adapted in other communities.

About the Urban Land Institute
The Urban Land Institute (uli.org) is a global nonprofit education and research institute supported by its members. Its mission is to provide leadership in the responsible use of land and in creating and sustaining thriving communities worldwide. Established in 1936, the Institute has over 34,000 members representing all aspects of land use and development disciplines.