Jim Blasingame's The Age of the Customer Wins Axiom Award 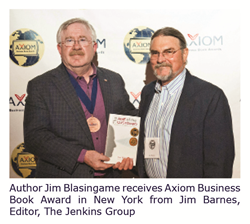 We think Jim's ideas are so important that we're using his book nationally to connect in a more relevant way with prospects and customers. - Jay Mincks, EVP Sales & Marketing, Insperity

Award-winning thought leader on small business and entrepreneurship, Jim Blasingame has received the Axiom Business Book Award for his third book, "The Age of the Customer: Prepare for the Moment of Relevance." It's the second award for this book, which has sold 40,000 copies.

The Axiom Awards are the largest and most respected guidepost for business books in the new world of publishing. These prestigious and competitive awards are presented in 21 business categories and serve as the premier list to help readers discover new and innovative works.

"It's a great honor to receive the Axiom Business Book Award," said Blasingame. "Of course, we're also pleased at the response from business leaders of all size companies, who are using my book to transport their businesses to where their customers already are, in the Age of the Customer."

In his book Blasingame reveals how the 10,000-year-old Age of the Seller is being subducted by The Age of the Customer® in a marketplace shift that has never happened before. Blasingame is uniquely qualified to chronicle such marketplace foresight: a half-century marketplace veteran, plus more than 17 years of conducting over 1,000 live interviews annually with thought leaders from every sector of the marketplace on his syndicated radio program, "The Small Business Advocate Show."

"As you read his book," said Steve Forbes, Chairman and Editor-in-Chief of Forbes Media, who wrote the Foreword, "you'll alternate between seeing Jim as a prophet or a heretic, depending on where you are on your journey of understanding about the transition from the Age of the Seller to the Age of the Customer."

"It's not surprising that Jim's book has received so much acclaim," said Jay Mincks, Executive Vice President of Sales and Marketing at Insperity. "We think Jim's ideas are so important that we're using his book nationally to connect in a more relevant way with prospects and customers."

Blasingame is president of Small Business Network, Inc., and award-winning host of the nationally syndicated weekday radio program, "The Small Business Advocate® Show." He is a high-energy keynote speaker, and a syndicated columnist for newspapers, magazines and online publications such as Forbes.com. BizJournals.com, FoxBusiness.com, Nasdaq.com.