A recent study by PsychTests.com reveals that men’s views of parenting and a father’s role in child-rearing are becoming less traditional. 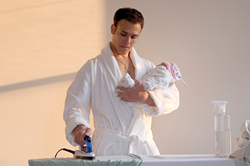 Fathers are taking a much more active role in the raising of their children.

3 out of 4 men are accepting of stay-at-home dads.

The “typical” father-child relationship has changed over the decades, especially in the world of sitcom. Ward Cleaver on Leave it to Beaver generally acted as a disciplinarian, leaving the nurturing aspect of parenting to his wife. The 80’s brought Dr. Jason Seaver (Growing Pains), a stay-at-home dad who practiced psychiatry while his wife worked outside the home. Modern Family further redefined the concept of traditional dads with gay fathers Mitchell and Cameron acting as nurturers as well as disciplinarians for their adopted daughter, Lily. So to what degree are today’s dads taking a more non-traditional approach to family and child-rearing? New research by PsychTests reveals that while some traditional beliefs are still lagging, men’s views of the role of fathers have shifted significantly.

VIEWS OF THE ROLE OF FATHERS AND MOTHERS

VIEWS OF HOW BOYS AND GIRLS SHOULD BE RAISED


o    14% would teach their son that crying and whining are unacceptable behaviors
o    27% would do the same for their daughters
o    34% think it’s inappropriate for boys to cry over “minor” issues
o    25% think that it’s fine for boys to cry and want their sons to be comfortable expressing their emotions.


o    57% would allow him to continue
o    37% would discourage him from these interests by trying to distract him with more masculine activities
o    6% would either forbid him to engage in these activities or punish him for doing so.

“The majority of women have welcomed the change in gender roles – being able to have a career, choosing not to get married or have children, etc. Men have taken a little more time to adjust to the times, but we are seeing a clear shift,” explains Dr. Ilona Jerabe k, president of PsychTests. “Husbands and fathers have gone from being the sole breadwinner and the disciplinarian to sharing the responsibility of running a home and raising children – some even going as far as trading roles with their wives and being the stay-at-home parent."

"There may still be some discomfort, however, or at least some misconceptions about a man’s family role – and interestingly, we see this quite a bit in our sample of men under the age of 30. For example, 65% of men over the age of 30 would support their wife’s decision to return to the work force and put the children in daycare; men under 30 are slightly less comfortable with this, at 59%. I think that once you become a parent, you realize how important it is to take a more active role in your child’s life - and more and more fathers are realizing this. It’s refreshing to see.”

What gender role views do you hold and how do you compare to others? Go to http://testyourself.psychtests.com/testid/2436 and find out!

Professional users of this assessment (therapists, life coaches and counselors) can request a free demo of the Gender Roles Test or any other tests from ARCH Profile’s extensive battery: http://hrtests.archprofile.com/testdrive_gen_1

Husbands and fathers have gone from being the sole breadwinner and the disciplinarian to sharing the responsibility of running a home and raising children.Fathers are taking a much more active role in the raising of their children.