Himalayan Yogi Yogiraj Gurunath Siddhanath brings a unique message of peace to audiences across the world through kriya yoga and a new world tour. 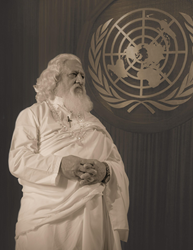 Earth peace through Self peace

For generations, many have sought to bring world peace to the planet. While peace has been cultivated in certain geographic regions, a global peace remains elusive. The concept of world peace seems to have become cliché.

The Tour stops in over twelve cities along with three spectacular retreats. The first retreat is along the Pacific Ocean in Carlsbad, the second at the base of Mt Shasta, and the third retreat is in the Catskill Mountains, New York. More information is available on the Siddhanath.org website.

Yogiraj Gurunath Siddhanath taught the concept of world peace for more than five decades. In fact, peace is the topic on which he established his foundation as a teacher. At the core, his message is and has been one of "Earth peace through Self peace". An idea that, by yogic breathing, meditation and self-reconciliation, a broader, global sense of camaraderie can be developed, what Yogiraj Gurunath Siddhanath calls world peace yoga.

Yogiraj Gurunath Siddhanath has brought this unique doctrine to audiences across the planet. Yogiraj has taught this message of peace at the esteemed United Nations, and at the same time amassed millions of views on his popular YouTube channel. Recently, the master's views on Earth peace have been compiled and shared in a book, called Babaji: The Lightning Standing Still.

Yogiraj Gurunath Siddhanath's visit will include multi-day teaching events and yoga retreats. At all of the tour stops, the author and teacher will expound upon the doctrine of "Earth peace through Self peace." Yogiraj Gurunath Siddhanath says that while in the West, Yoga is often viewed as physical postures. In India, Yoga has long been the gateway to profound, inner peace. In his own words, "The alpha and omega of yoga is self realization" - in essence, the most lasting inner peace humanly possible..

For details about Yogiraj Gurunath Siddhanath's tour and where to see him in-person, visit his website: http://www.siddhanath.org. The website also offers books, poetry and videos as well as in-depth information about his life's mission.