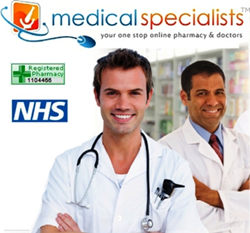 The BLF primarily aim to use Breathe Easy Week as a method of boosting public awareness of the seriousness of maintaining lung health and instil more knowledge into everyone about the risk factors that can detrimental to the lungs...

Medical Specialists® NHS Pharmacy are proudly supporting Breathe Easy Week 2015, set to begin on 15 June and running until the 21st. The theme of this year’s Breathe Easy week has been chosen to be 'breathlessness', with the aim being to make people aware of what can impact the lungs and cause create problems.

Many may not be aware of this astonishing statistic, but more than 12 million people across the UK are affected by lung disease (meaning an estimated 1 in 7 people in the UK are afflicted), a major factor in why the charity the British Lung Foundation (BLF) run Breathe Easy Week each year in mid-June.

The BLF primarily aim to use Breathe Easy Week as a method of boosting public awareness of the seriousness of maintaining lung health and instil more knowledge into everyone about the risk factors that can detrimental to the lungs, and cause any number of major lung conditions such as asthma, bronchitis, chronic obstructive pulmonary disease (COPD), lung cancer and many more.

The term ‘lung disease’ basically covers any problem within the lungs that hinders them from functioning as they should. The three main types of lung disease:

Perhaps the biggest course of action anybody can take to boost their lung health is quit smoking – or continue to not smoke of course for those that do not do so already. Smoking is single-handedly the biggest cause of COPD (an umbrella term given for a range of conditions that include chronic bronchitis and emphysema).

Smoking results in damage being caused to the airways and lungs, leading to a gradual development of COPD. Although damage to the airways is irreversible, stopping smoking can put a halt to the onset of COPD, or at least slow the progression of it. It is worth remembering that symptoms can also be made much worse for asthmatics and those with other lung conditions that continue to smoke.

The hugely underestimated second-hand (passive) smoking had widely been pinpointed as another major cause of lung disease. For this reason, the BLF have obtained a petition of signatures to make it illegal for anybody to smoke in cars with children present.

People around the country can make a big difference to campaigns like this with just one signature, and the BLF will be running Breathe Easy groups that will be holding talks, coffee mornings, quiz nights and lots more exciting events.