The company and its representatives contribute freshwater well, supplies, playground, and donations to 400 families in La Jungla, Mexico 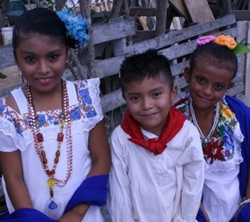 The company’s donation of a freshwater well provides clean water for the first time in nearly a decade of living there.

Cancun, Mexico, June 10, 2015 – Jusuru International donated contributions to build a freshwater well for a forgotten community of La Jungla, about a one hour drive from Cancun, Mexico. Approximately 50 independent representatives also brought personal donations such as medical supplies, clothing, toys, shoes, and other necessities and physically installed a playground for the 400 families that live in the impoverished village. The humanitarian effort was done during an incentive vacation that the representatives earned by meeting specific sales criteria based upon the company’s line of nutritional and skincare products.

The company’s donation of a freshwater well provides clean water for the first time in nearly a decade of their living there. Prior to the company’s contribution, the nearest source of water was over two kilometers from the village. Typical for developing countries, women and children often spend four to six hours collecting water every day due to the inconvenient proximity and access to clean water. The well, which is fully equipped with an electric pump, sources groundwater from the underground rivers of the Yucatan peninsula.

According to the World Health Organization and UNICEF Joint Monitoring Programme (JMP, 2014), 750 million people around the world lack access to clean water. Unclean water causes 80% of all disease in developing countries. In fact, JMP also reports that three million people die each year of waterborne disease, many of whom are children.

The residents of La Jungla were overwhelmed with the time, labor, and donations from Jusuru’s representatives. The children immediately ran to the playground and the mothers were appreciative of the benefits the playground, supplies, and freshwater well will bring. Asma Ishaq, the company’s president stated, “We always leave a place better than we find it. It is a privilege to take our representatives to Cancun as a reward for their effort; it is an even greater honor to see that their favorite part of the vacation is doing the work to better the lives of people in need.”

To commemorate the humanitarian effort, a local artist painted a “Giving Tree” mural on a wall in the community specifically naming the over 300 representatives at Jusuru International that qualified to take part in the giving back project.

About Jusuru International
Jusuru International was launched out of the science behind Liquid BioCell™, a new generation of nutraceuticals for joints, skin, and cellular health. Backed by 37 clinical studies, 7 US and international patents, and numerous industry awards, Liquid BioCell™ has been making its mark in the multi-billion dollar anti-aging industry. With over 20 years of R&D expertise and a scientific leadership team educated at Harvard, Princeton, Cornell, and Rice, their laboratories have been providing quality custom manufacturing services to the dietary supplement industry since 1994, and meet the most stringent quality standards governing the production of nutraceutical and pharmaceutical products. Their facility, occupying over 150,000 square feet, is a cGMP compliant facility following the current good manufacturing practices set forth by the US Food and Drug Administration. It is certified by three 3rd party auditors, the Natural Products Association, NSF and NSF for Sport ®, and holds a drug manufacturing license issued by the State of California Food and Drug Branch.