World Day Against Child Labor is recognized on June 12. Unbound's response to reducing child labor is to offer benefits of individual sponsorship that enable children to attend school rather than go to work at an early age. 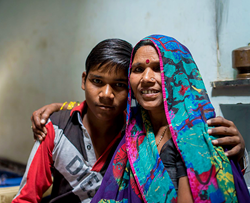 Manish, a sponsored child through Unbound and his mother Shakuntla in Agra, India.

The future of kids who sell trinkets at the Taj Mahal is full of darkness.

More than 20,000 Indian children are in school and not subjected to child labor because of Unbound’s efforts. It’s a fact made even more prominent on a day set aside to rally the world against child labor.

Manish, a teen and youngest of seven children from Agra, India, is one example of the Unbound program. Manish started peddling trinkets to tourists at the Taj Mahal by age 5.

“But I saw children going to school,” Manish said. “I asked my mother if I could go to school, too.”

According to the United Nations, more than 200 million children are engaged in child labor around the world. India has the biggest share of those children going to work instead of going to class.

“The future of kids who sell trinkets at the Taj Mahal is full of darkness,” according to Abhishek Pandey, of Unbound, an international humanitarian aid organization serving more than 25,000 children in India and more than 300,000 people around the world.

Pandey says working children provide income usually needed to put food on the table at home. They don’t go to school, which leaves them few options for work as adults.

“When they grow up and get married, it will be so much harder for them in making a living,” Pandey said.

India has made progress toward reducing the number of child laborers by passing new labor laws.

Meanwhile, Unbound takes a personalized approach to helping children get off the streets and into classrooms through its sponsorship program.

Manish’s mother, Shakuntla, heard about Unbound through friends in their neighborhood and signed him up. “The moment I got sponsored I stopped selling at the Taj Mahal,” Manish said.

Once he became sponsored, the benefits for Manish and his family started almost immediately. His sponsorship through Unbound now pays for his schooling, and helps provide food for the family, so the money he made selling trinkets is no longer needed.

About Unbound
Unbound is the largest nonprofit organization in Kansas with more than $120 million in annual revenue. Unbound works side by side with people of diverse faith traditions in 20 countries, bringing people together to challenge poverty in new and innovative ways.

Unbound distributes direct aid as quickly and efficiently as possible to people who need it. 92.5 percent of Unbound's expenses go toward program support.