Bravo Pawn Systems Slashing Away at Prices With New Feature

The Price Slasher, a new feature on Bravo's pawn software, is now available to customers who look for the added functionality of automating the inventory discounting process. 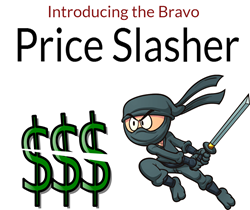 We released the Price Slasher to alleviate the stress on employees and managers alike, and to automate the process for pawnbrokers in order to increase overall inventory movement and sales.

Every 4 to 6 weeks, Bravo Pawn Systems comes out with a new release that updates their software to provide the latest and greatest tools for its users. In the release that occurred on May 26, 2015, Bravo announced a new feature called the Price Slasher – which automatically discounts the price of general merchandise items a certain percentage every X number of days. This feature also prints a custom price tag that shows discounts based on an item’s age in inventory.

By utilizing this new feature, pawn shops can better manage their aging inventory and relieve the strain of a manual markdown process by automating the discounts. Instead of having aged items sit on the sales floor for extended periods of time and at prices too high to elicit sales, the Price Slasher will help move inventory quicker by ensuring you are discounting in a timely and consistent manner. Also, this will encourage customers to return to purchase items they are desiring but unable to afford at the moment based off of the discount schedule on the printed label – improving the customer buying experience in pawn and retail stores.

Steve Mack, CEO of Bravo Pawn Systems, says, “To keep track of how long each and every inventory has been sitting on your shelves and when they should be optimally discounted for movement is a massive undertaking for the already bogged down pawnbroker. We released the Price Slasher to alleviate the stress on employees and managers alike, and to automate the process for pawnbrokers in order to increase overall inventory movement and sales.”

The Price Slasher is just one of the many new innovative features to be released from Bravo Pawn Systems, with numerous more in the pipeline to become available this summer. Some features to come include a mobile application for Bravo users to access the software and approve exceptions from mobile devices, an integration with EyesOn to improve internal security, and item exporting service for various eCommerce platforms, including Craigslist, Gunbroker, Amazon, and eBay, to further simplify the posting process.