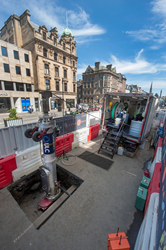 CISBOT technology helps gas utilities, such as SGN, maintain the safety and reliability of large diameter cast iron gas mains by renewing the joints, where gas is most likely to escape.

ULC Robotics, a leading robotics, energy services, and research and development company focused on the energy and utility industries, has deployed its Cast Iron Joint Sealing Robot (CISBOT) for the first time in Scotland on iconic George Street in Edinburgh. Similar to Fifth Avenue in New York City, the visitors and high-end shop owners along George Street are not likely to notice CISBOT because the robot is virtually invisible.

In conjunction with UK gas distribution network SGN, CISBOT will carry out advanced maintenance in more than 1,965 feet of gas pipe that delivers gas to businesses and residents in one of the city’s most high profile and central locations. Unlike traditional methods of rehabilitating or replacing cast iron gas mains, ULC’s CISBOT robot enters the live, large diameter cast iron gas mains through small excavations and the robot’s advanced technology enables it to repair joints while minimizing disruption to the public.

“In George Street, we’ll be carrying out maintenance on around 1,965 feet of gas pipe. The work will take approximately six weeks, however the use of this technology will make a difference in minimizing disruption, as we will only need to make two excavations in the road,” said Matt Ferguson, Team Manager for SGN. “In fact, 96% of the work will be unseen as it will take place under the ground.”

By using ULC’s CISBOT robotic technology on George Street, the non-intrusive work performed on live gas mains means that many businesses along the busy section of the street benefit because their gas services remain intact and online during the procedure. Furthermore, the work done with CISBOT reduces the risk for gas leaks, and because there are no large-scale excavations, greenhouse gas emissions are greatly reduced.

About ULC Robotics, Inc.
ULC Robotics, Inc. is a leader in developing and deploying innovative technology and processes that help pipeline operators and energy companies repair, inspect and assess their infrastructure. The deployment of ULC Robotics’ range of products and services helps to eliminate costly and disruptive excavation while eliminating gas leaks, reducing greenhouse gas emissions and improving efficiency.

Both ULC Robotics and their clients have shared accolades for developing some of the most innovative products in the energy industry. Recognition includes a 2014 UK Energy Innovation Award for enabling gas utilities to deliver a safe and reliable supply of energy to customers and inclusion on the 2014 Top 50 Global Robotics Companies by Robotics Business Review. For more information on ULC Robotics, Inc. and its products and services please visit http://www.ulcrobotics.com

About SGN
SGN operates over 74,000km of gas mains and services in Scotland and the south of England. Whoever the supplier is, SGN has a responsibility to deliver gas safely, reliably and efficiently to all 5.8 million customers. For more information about SGN visit http://www.sgn.co.uk