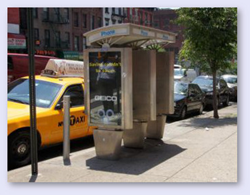 The Solar Kit system turns the payphones into coin operated cell phones without any dependence on utility power lines. Since there are no visible changes made to the existing payphone kiosks, payphone users are unaware as to whether the phone is grid connected or solar powered. Solar panels are only visible on a few of the older style pedestal phones.

Rick Contrata, President of Renewable Edge stated, “In addition to the positive environmental impacts and proof that the application of solar power supply systems are beneficial in urban areas, this achievement helps to return the safety and convenience of a significant number of now operable payphones to many areas of New York City”.

The Renewable Edge Solar Kit system operates using custom, high efficiency solar panels, deep cycle rechargeable batteries and MPPT or PWM charge controllers that protect the batteries from over-charging and over-discharging. The system is designed to compensate for the limited sunlight at street level caused by shading of the many tall buildings in Manhattan and the surrounding boroughs. Advances in solar power conversion technology over the past several years have made solar power systems much more cost effective for smaller applications like NYC’s payphones.

Renewable Edge has been retrofitting and installing Solar Kits into existing NYC payphones since 2013, targeting the City’s most vulnerable areas where payphone service was lost due to malfunctioning, degraded underground power lines and more recently, the damage caused by Hurricane Sandy in 2012. Renewable Edge clients include multiple Payphone Franchisees of NYC, such as Titan 360 and Van Wagner Communications.

For more information, please contact David Schaffer at dave(at)renewableedge(dot)com or 914-366-7382