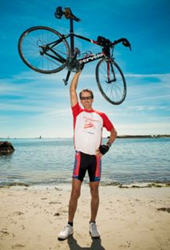 Cyclist Barry Haarde is on a mission to raise awareness about hemophilia and encourage individuals to support needy hemophilic children through Save One Life, which supports more than 1,200 individuals with hemophilia in eleven developing countries through direct sponsorships, scholarships and micro-enterprise grants.

Hemophilia is a rare genetic disorder that prevents blood from forming an effective clot. Occurring in approximately one out of every 5,000 male births, untreated hemophilia can cause prolonged internal bleeding, painful joint deformities, crippling and death. Of the estimated 400,000 with hemophilia globally, 75% do not have access to blood-clotting medicine. Most live in extreme poverty.

On May 30 Barry started “Wheels for the World: Piles of Miles” by dipping his bicycle wheel in the Pacific Ocean in San Francisco, California. He has cycled through California, Nevada and Utah, and crossed the Continental Divide in Colorado on June 18. His 52-day tour will continue through the Midwest up to Lake Erie and east through New York and Vermont to Portsmouth, New Hampshire.

In 2012 Barry became the first person with hemophilia and HIV to cycle across the United States. He rode 3,667 miles from Ashland, Oregon through eleven states and Canada to Portsmouth, New Hampshire in 50 days. Two more cross-country trips in 2013 and 2014 raised that total to over 10,000 miles. This summer is Barry’s longest ride yet: when he dips his bicycle wheel in the Atlantic Ocean on July 21 he’ll have added 4,000 more miles to that total. Through his four rides Barry has raised over $160,000 for Save One Life.

Barry is an outstanding example of his favorite motto, attributed to musician Bob Marley, “You don't know how strong you are until being strong is the only choice you have.”

“Having survived over thirty years with HIV, and also having cured hepatitis C—from which I’d developed liver cirrhosis—I have a very strong sense of gratitude and appreciation,” says Barry. “Not only have I survived, I am able to maintain the physical health and conditioning required to ride a bike across America. I can at least help those who still struggle by dedicating my rides to them.”

Baxter International, Inc. is the gold sponsor of “Wheels for the World 2015: Piles of Miles.” Biogen, Emergent BioSolutions, George King Bio-Medical, Hemophilia of Indiana, OptumRx and The Alliance Pharmacy are also supporting this event.

To learn more about Barry and his Wheels for the World campaign, and about sponsoring a child with hemophilia in a developing country, visit http://www.SaveOneLife.net.