The machine-learning technique known as deep learning, which has shown impressive results in voice and image recognition, has been adopted by the leading bioinformatics company focusing on cancer and aging as part of its DeepPharma platform. 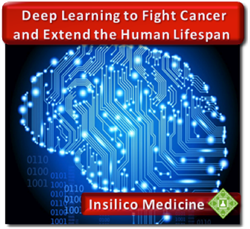 A machine-learning technique which borrows some of its principles from the brain and gives computers the ability to recognize speech and categorize images is also being utilized in the ongoing fight against cancer and other age-related diseases. Insilico Medicine, a bioinformatics company dedicated to drug discovery for cancer and aging, has launched its proprietary DeepPharma (TM) platform. DeepPharma utilizes the latest advances in deep learning to improve computer analysis of massive multi-omics data and millions of tissue-specific pathway activation profiles obtained using proprietary methods developed by the company.

Dr. Zhavoronkov plans to integrate deep learning platform for drug discovery with each of Insilico’s R&D teams. Insilico has teams of researchers in Russia, the United Kingdom, Switzerland, Poland, and the US, with R&D collaborations in Canada, Israel, Switzerland, and China.

“NVIDIA GPUs are the foundational technology driving deep learning innovation in academia and industry,” said Mark Berger, senior alliance manager, Life and Material Sciences at NVIDIA. “We’re working with organizations to expand the use of the technology to new areas, and are happy to see that Insilico Medicine is applying its GPU-accelerated DeepPharma platform to help find treatments for cancer and other serious age-related diseases.”

While deep neural net concepts were proposed decades ago, the revolution in the use of the technique started around 2010 when deep learning systems were trained on large image datasets achieving almost human image recognition and later surpassing humans. The technique is rapidly transforming the way we work with images, text, videos and voice. However, application to genomics and drug discovery is much slower, since it requires massive data bases required to train the system and special configuration enabling the algorithms to work with multi-omics and patient data. Insilico Medicine developed methods to massively augment its proprietary gene expression and proteomic data using public databases, methods to normalize data and turn it into usable pathway activation profiles that can be used by deep learning algorithms. It also developed methods to process clinical trials and large amounts of research publications. These methods are now integrated into the DeepPharma platform powered by one of the most advanced GPU-based platforms.

Other milestones in deep learning achieved by Insilico Medicine include:

Next month, the company plans to fuel its growth by hiring more data scientists at the first-ever deep learning “neuro hackathon." "The hackathon will focus on deep learning to identify brilliant individuals and teams interested in transforming the pharmaceutical industry,” said Zhavoronkov.

If you have any questions about the science of aging, bioinformatics, or InSilico Medicine’s plan in anti-aging research and drug discovery, please call (443) 451- 7212 or visit http://www.insilicomedicine.com