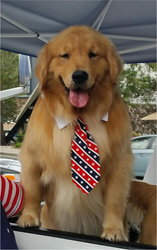 The parade, which started with a young boy in a red Radio Flyer wagon bearing the American flag, is the living embodiment of a Norman Rockwell painting.

Mayor Max of Idyllwild, California, his Deputy Mayors Mikey and Mitzi, and his Chief of Staff, Phyllis Mueller, invite you to the Rotary’s 4th of July Parade and Street Festival, scheduled for Saturday, July 4th.

Not only will the Mayor be one of the very special VIP’s participating in the parade, but he will be on hand after the parade to greet his constituents and Idyllwild visitors during the Street Festival immediately following the parade. Photo opportunities and interviews with the Mayor will be available. Mayor Max is a pure-bred Golden Retriever.

The parade, which started with a young boy in a red Radio Flyer wagon bearing the American flag, is the living embodiment of a Norman Rockwell painting.

Over 75 parade participants are expected. According to the California Highway Patrol, almost 10,000 spectators have attended the parade in years past. Presented by the Idyllwild Rotary, parade participants will begin staging at 8 a.m. on Saturday, July 4th, with the Honor Guard of American Legion Post 800 leading the way at 10 a.m. Participants will include local car clubs, firefighters and forest service, Santa Claus, Smokey the Bear, scouts, horsemen and horsewomen, clowns, and festive floats complete with music and colorful decorations. Some of the parade entries will even be handing out candy and small American flags.

As spectators follow the parade into town, they will be treated to a Street Festival featuring games, a dunking tank, pie, a hot dog and watermelon eating competition, displays, and a food court and beer garden. Highlights of the Street Festival will include a chili cook-off competition with a $300 cash prize, and a football toss, with five lucky randomly selected contestants having the chance to win $5,000 by tossing a football 25 yards through a tire dangling on a rope.

Vendors wishing to participate can secure a 10’ x 10’ booth location for only $75. Sponsorship packages are available as well starting at $300 in cash or merchandise. All proceeds generated will benefit the Idyllwild Rotary and the over 35 community projects they support.

Mayor Max is the Mayor for life of Idyllwild based upon the hard work of him, his Deputy Mayors, and their staff in attending and participating in more than 350 public service events to help local charities, businesses, and organizations in the community and surrounding southern California locations.

For more information on vendor locations, sponsorship opportunities, or to secure an application to participate in the parade, contact Joe Mattioli at (570) 350-1900 or thunderman3@msn.com.

For more information regarding Mayor Max, contact Phyllis Mueller at (951) 659-0283, phyllis(at)mayormax(dot)com, or see the Mayor’s website at http://www.mayormax.com.