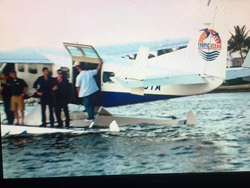 When it was presented to Robert VanWinkle better known as 'Vanilla Ice' to incorporate arrival by seaplane into his hit TV show "The Vanilla Ice Project" he knew Tropic Ocean Airways would be the team to call.

"The Vanilla Ice Project" which airs on the DIY network features the 90's musician turned real estate entrepreneur as he remodels mansions in South Florida. On his latest project in Palm Beach County, Florida - Rob is in a rush to finish the house before the big reveal. The Season 5, Episode 13 "Frenzied Finish" aired Saturday evening at 10pm and will re-air this Friday June, 26th at 7PM EST.

Toward the end of the episode, Vanilla Ice prepares for his guests arrival for his first reveal of the project by hopping aboard Tropic Ocean Airways seaplane to get an aerial view.

"There's no better way to get an aerial view than this right here" said Rob AKA Vanilla Ice of Tropic Ocean Airways Cessna Grand Caravan EX.

The pilot and crew handled every aspect of the journey including an on-water landing and seamless transfer to a Jetski to ensure that the star had a grand entrance.

"VIP baby" he said as he hopped off his Jetski and onto the shore of the freshly remodeled waterfront home in Palm Beach County, Florida.

Tropic Ocean Airways based in Fort Lauderdale, FL is expanding their operations further strengthening their position as a leading airline in Florida and the Bahamas providing clients with a premium travel experience. The airline has experienced rapid growth in the first few years of operation, to the point where today they are flying private charters, scheduled destination flights, cargo, and direct to yacht provisioning services.

About Tropic Ocean Airways:
Founded in 2009 by US Navy TOPGUN Graduate Rob Ceravolo, Tropic Ocean Airways LLC is an FAA-certified air carrier specializing in private terminal service throughout Florida and the Caribbean. Tropic Ocean Airways fleet of late-model Cessna Caravan Amphibians are handled by highly experienced military aviators and seaplane instructors providing service to private travelers as well as companies and organizations within the yachting and boating industry.