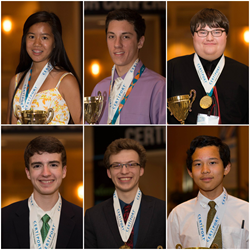 Certiport (http://www.certiport.com), a Pearson VUE business, the leading test delivery solution provider for the global workforce and academic markets, today announces the 2015 Microsoft Office Specialist (MOS) U.S. National Champions. The winners were named at the U.S. National Championship event in Orlando, Florida, and the first place champions will travel to Dallas, Texas, to compete in the MOS World Championship from August 9-12, 2015.

The U.S. winners are as follows:

From June 2014 to May 2015, more than 430,000 students in the United States entered the competition to demonstrate their level of proficiency in utilizing the world's foremost desktop computing applications. During the qualifying round, they entered a passing score on an eligible MOS exam and 86 finalists with the best scores and exam times were invited to participate in a unique competition exam in their track at the MOS U.S. National Championship.

Finalists were given a printed copy of a document, spreadsheet or presentation to recreate along with printed instructions and digital assets. They were scored according to the accuracy of the recreation compared to the original. The champions in each program, along with a chaperone, have won an all-expense-paid trip to participate in the 2015 MOS World Championship in Dallas, Texas.

“This competition has grown immensely in the last few years as students around the country have realized the value of earning MOS certification to prepare for success in college and careers,” said Aaron Osmond, vice president of the global Certiport offering for Pearson VUE. “These six champions have proven their superior knowledge of Microsoft Office applications, and we wish them the best as they compete at the World Championship.”

Certiport anticipates more than 100 finalists from more than 30 countries at the MOS World Championship where students will again participate in a unique competition exam in their track. Six winners will receive cash prizes, medals and the title of Microsoft Office Specialist Word, Excel or PowerPoint World Champion.