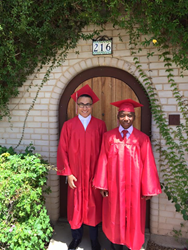 Khalil from Palestine (left) and Evanildo from Mozambique celebrate with their graduating class at Arizona Central High School in Phoenix.

Phoenix area resident and former Arizona Senator David Lujan so enjoyed meeting Ayusa students when he worked on Capitol Hill that he decided to host students himself ... Lujan welcomed Ivanildo from Mozambique and Kahlil from Palestine.

Ayusa International, a non-profit organization that has promoted global learning and leadership through high school student cultural exchanges for more than 34 years, is intensifying its annual search for families in Arizona interested in hosting international students for the 2015-2016 school year.

Ayusa is looking for host families throughout the entire state, specifically in and around:

Ayusa host families who open their home to exchange students contribute to the global community as public diplomats for greater international understanding. Each host family and student creates a lasting relationship that spans the cultural differences between their two nations.

Ayusa works with diverse families who are interested in hosting an international student of high school age. Families without children, empty nesters, military families, retirees, and single people are all welcome. Ayusa families come from all 50 states and reside in rural, suburban and urban communities.

Phoenix area resident and former Arizona Senator David Lujan (former house Democratic Minority Leader, representing the 15th District from 2012-2013) so enjoyed meeting Ayusa students when he worked on Capitol Hill that he decided to host students himself this past academic year. Lujan welcomed Evanildo from Mozambique and Kahlil from Palestine, both of whom are scholarship recipients from the Department of State Kennedy-Lugar Youth Exchange and Study (YES) program, which was implemented after 9/11 in order to promote bonds of friendship between America and primarily Muslim countries.

“My decision to host was last-minute, but I have enjoyed every second of this experience,” said Lujan, who also took the students on several trips including to New York, San Diego, San Francisco and several Arizona excursions. “One of my fondest memories is the time they couldn’t understand why it was taking two hours to bake cupcakes in the oven, as they had set the temperature according to the Celsius scale instead of Fahrenheit. Seriously, they are both smart and talented young men, and I’m looking forward to seeing them become famous world leaders someday,” he added.

“Arizona is a popular destination for Ayusa exchange students in the U.S.,” said Connie Coutu, Ayusa Regional Manager for the Southwest. “Its stunning scenic landmarks, recreational opportunities and Southwest culture certainly play a part, but the Grand Canyon State’s host families’ enthusiasm in welcoming cultures from around the world are what really attracts the students,” she noted. “Hosting an exchange student also allows families to learn about other countries and cultures, without the travel. If you’ve ever thought about sharing your Arizona lifestyle with a student from abroad, I encourage you to give us a call, or check out our website to read the many stories of these international friendships that last a lifetime!”

Host families provide the exchange student with three meals a day and a bedroom (private or shared). A professionally trained Ayusa representative supports each host family, student, and local school throughout the program year. Ayusa’s exchange students are 15-18 years old and come from more than 60 countries around the world. All students are fully insured, bring their own spending money and are proficient in English.

How to Host an International Student
Interested families can learn more about the program and available exchange students, and request additional information by visiting http://www.ayusa.org or calling 1-888-552-9872.

The process to apply is simple. Families complete the online application, which includes questions about themselves and local high school, references, and a background check. Once the application is submitted, the local Ayusa Community Representative will conduct an in-home interview. They can also help each family with any questions they may have about the application or process.

After families are fully approved, they can select the Ayusa student they would like to host.

About Ayusa
Ayusa International (http://www.ayusa.org) is a 501(c)3 non-profit student exchange organization founded in 1981 and an official U.S. Department of State designated Exchange Visitor Program Sponsor. In addition, Ayusa administers high profile grant programs funded by the U.S. Department of State and other organizations. Ayusa is a sister company of Intrax, a family of organizations that provides a lifetime of high-quality educational, work and volunteer programs that connect people and cultures. Intrax is headquartered in San Francisco with offices on four continents.