The Buffalo Bill Center of the West in Cody, Wyoming, is now exhibiting the 132-year-old Winchester Model 1873 unearthed at Nevada’s Great Basin National Park in November 2014. 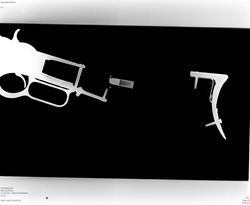 An x-ray of a Winchester rifle [Model 1873] determines whether the rifle contains live ammunition.

Why would you leave your rifle and not come back for it?

In November 2014, archaeologists at Great Basin National Park in Nevada stumbled on a well-hidden, 132-year-old Winchester Model 1873 lever action rifle. "Park employees posted a photograph of the rifle on their Facebook page," says Buffalo Bill Center of the West's Cody Firearms Curator Ashley Hlebinsky. "It wasn't long before the post with the 'Forgotten Winchester' as they called it, went viral and attracted considerable national attention.

“Then, the Great Basin people contacted us for help in identifying the rifle since we hold the factory records for the Winchester Firearms Company. The Winchester Model 1873 alone may be the most iconic western firearm of all time,” Hlebinsky continues. "This is especially true of its marketing slogan, ‘The Gun that Won the West.' With all it’s been through, this particular gun has certainly carried on that legend.”

Park employees found the rifle—exposed to sun, wind, snow, and rain—leaning against a tree among some junipers in the park. The cracked wood stock, now weathered to gray, and the brown rusted barrel blended into the colors of the old juniper tree in a remote rocky outcrop, keeping the rifle camouflaged for more than a century.

“The workers just happened to notice the rifle under the tree,” said Eva Jensen, Cultural Resource Program Manager for Great Basin National Park upon meeting the Center of the West staff. “It's as if someone propped it there as he sat down to have lunch. Then, he might have just walked off without it."

Park officials had driven the gun-in-case to the Center’s Cody Firearms Museum in Cody, Wyoming, for conservation and identification. One of the first steps of Conservator Beverly Perkins, Hlebinsky, and Curatorial Assistant Dan Brumley was to “admit” the firearm to neighboring West Park Hospital’s radiology department for x-rays. The images quickly assured the Center’s employees that the gun was not loaded, but did have a cartridge in the trap of the butt stock.

The door to the butt stock was loosened with a drop of penetrating oil, and the object was removed and identified as a Union Metallic Cartridge Company .44 WCF cartridge, dated 1887 – 1911. To stop further flaking of the wood, Perkins used an adhesive (2% Klucel G hydroxypropylcellulose) mixed in distilled water and ethanol.

“Why would you leave your rifle and not come back for it?” Hlebinsky asks. “How many years was it hidden? Why was it left leaning against a tree? We here at the Buffalo Bill Center of the West and the staff at Great Basin are both asking the same questions. The mysteries surrounding this Winchester 1873 have truly fueled its popularity.”

Hlebinsky encourages individuals to weigh in on how the Great Plains rifle came to rest for 132 years before workers discovered it. “What do you think happened?” she asks. “Enter 210 at iScout.bbcw.org to tell us why you think this rifle was left out in nature.” In gallery visitors can enter their comments on the kiosk next to the display.

The Great Basin gun is currently on display in the Firearms Museum where it will remain until fall 2015 when the Center returns it to Great Basin for its 30th anniversary and the hundredth anniversary of the National Park Service in 2016.

An x-ray of a Winchester Model 1873 determines whether the rifle has live ammunition.

An x-ray of a Winchester Model 1873 at West Park Hospital, just across the street from the Center of the West..

The Winchester 1873 propped against a juniper tree in Great Basin National Park where it went undiscovered for 132 years.