"When your friend the President of the United States asks you to serve your country, you really can't say no, can you?" says Robert W. Jordan, former US ambassador to Saudi Arabia and Middle East Expert. Now with Steve Fiffer, he invites readers on a personal and intimate account of what really transpired in his new memoir "Desert Diplomat: Inside Saudi Arabia Following 9/11" (Potomac Books). 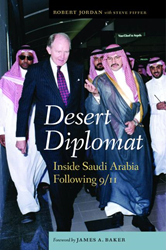 Our relationship with the Saudis was on life support. I was the one who had to administer the CPR

I realized then my life had changed forever

On September 11, 2001 at roughly 8:30am ET, a plane hit one tower of the World Trade Center; then the second tower was hit. "It was clear our country was under attack," says Robert W. Jordan, former US ambassador to Saudi Arabia and author of the new memoir with Steve Fiffer "Desert Diplomat: Inside Saudi Arabia Following 9/11"(Potomac Books). "I realized then my life had changed forever."

In the spring of 2001 George W. Bush selected Dallas attorney Robert W. Jordan as the ambassador to Saudi Arabia. Jordan's nomination sped through the U.S. Congress in the wake of the terrorist attacks, and he was at his post by early October.

James A. Baker III, Sixty-First U.S. Secretary of State has said, "Ambassadors are like the Swiss Army knives of diplomacy. You have to be able to do everything. You are in charge of all assets of America abroad in your country. Jordan was intelligent, savvy, and street smart."

Jordan points out he had no prior diplomatic experience, but Saudi Arabia mandates that the U.S. ambassador be a political appointee who has the ear of the president. He considered himself to be what Thomas Jefferson once described as a "citizen diplomat" someone whose personal skills with human relationships and professional experience aptly qualified him as Ambassador to Saudi Arabia during a time of dynamic geopolitical events.

With the benefit of history as reflected in "Desert Diplomat," it is clear that Jordan was the right choice for what must have been the most difficult and critical diplomatic post of all US embassies. Hence, with little time to plan, he learned on the job to manage an important embassy during war and became an expert on the Middle East culture during a critical chapter in world history while protecting U.S. interests following the most significant terrorist attacks on the United States in history.

Jordan speaks out about the key issues he faced: Senior Saudi officials denying that 15 of the 19 hijackers were Saudi nationals, the nervousness of the Saudis about the U.S. using their country as a base for attacks on Taliban in Afghanistan, dealing with supportive and opposing Saudi factions, the dysfunctional relationship within the U.S. governmental agencies such as the FBI, CIA, Department of State and the Department of Defense in addition to the growing tension between Israel and the Saudis.

With "Desert Diplomat" Jordan invites readers to a front row seat to history through his eyes and in his shoes. He provides them with a first-hand account of the challenges he faced. Challenges that had to be successful in resolving the complex times in which he U.S. ambassador to Saudi Arabia.

Designed to educate people who do not really know anything about the Middle East, "Desert Diplomat" depicts some of the most important times in history which includes Jordan's preparation, arrival, and interaction with the Saudis and with his U.S. mentors, advisors, and superiors in the years following. His no holds bar "play-by-play" memoir is an easy read that reveals his personal and intimate revelations of what really happened.

The success of his tenure as ambassador depended on his understanding and his deft management of these conflicting philosophies, priorities, and perceptions. Often the minefield of his job was littered with "unintended consequences" of those vying for their own best interests. The current events in the region are best understood in the context of the culture and dynamics that Robert W. Jordan is uniquely qualified to address as an expert regarding politics, the Middle East and the best interests of the United States.

Books are available online and in bookstore everywhere.

Robert W. Jordan is Diplomat in Residence and adjunct professor of political science in the John G. Tower Center for Political Studies at Southern Methodist University. He served as the U.S. ambassador to Saudi Arabia from 2001 to 2003 and as a partner in the international law firm Baker Botts L.L.P. for many years where he headed Middle East practice in Dubai.