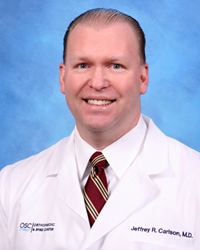 Less pain, less blood loss, and quicker recoveries are the driving force behind these new techniques.

Less Exposure Surgery (LES) is based on a new philosophy of doing surgery. LES is less invasive than MIS. LES incisions are small incisions through which the surgeon only exposes what needs to be treated for maximum effectiveness. By developing innovative technologies and techniques tailored for pinpointing the problem and fixing it without collateral damage, LES minimizes normal tissue disruption without relying on excessive radiation.

Dr. Carlson remarked on the LES technique, “Advancements in spine surgical techniques are now allowing patients to have outpatient lumbar fusions. SpineFrontier continues to lead in techniques that decrease the pain of surgery and provide the same outcomes as standard procedures. Less pain, less blood loss, and quicker recoveries are the driving force behind these new techniques."

Susan Finkel, a patient of Dr. Carlson’s who underwent an outpatient Less Exposure Surgery midline procedure emphasized the ease of her recovery. “Having this done was one of the best decisions that I have ever made and being able to go home within a few hours of surgery and being able to return to work so quickly made this the easiest surgery I’ve ever had.”

Dr. Carlson is a board-certified orthopedic surgeon, focused on treating spine disorders. He received his M.D. from George Washington University in 1993 and completed his residency in orthopaedics at the Harvard Medical School Hospitals (Massachusetts General Hospital and Brigham and Women’s Hospital). He also completed an Orthopedic Trauma Surgery Fellowship and a Spine Surgery Fellowship. Dr. Carlson is a managing partner of the Orthopaedic and Spine Center in Newport News, VA and served as Chief of Surgery at Bon Secours Mary Immaculate Hospital.

Dr. Carlson is a long-time supporter of the Arthritis Foundation. As an expert in his field, he has published and lectured extensively on the subject of orthopedics and has appeared on television several times. In 2008, Dr. Carlson was one of the first surgeons in his area to perform a cervical disc replacement.

SpineFrontier designed the PedFuse REmind Midline Screw Family under the unifying umbrella of LES midline tissue-preserving surgery. The PedFuse Pedicle Screws use CortiCan™ thread technology, which means the wider space between threads at the tip of the screw bonds it to the less dense, cancellous bone interior and threads grow closer together at the proximal head of the screw to grip the harder, cortical shell on the surface of the bone.

SpineFrontier Inc. (http://www.spinefrontier.com) is a growing medical technology company that designs, develops and markets both implants and instruments for spine surgery based on the Less Exposure Surgery (LES®) Philosophy. These technologies are designed to allow for outpatient surgery due to minimal disruption of normal tissues. SpineFrontier believes LESS is MORE: LESS time in treatment and recovery is MORE time in action for patients and surgeons. SpineFrontier is headquartered in Beverly, MA. It was founded in 2006, and released its first products in 2008. SpineFrontier is a KICVentures portfolio company and the leader in LES technologies and instruments.