Cornerstone University, a Christ-centered community, reaffirms its commitment to God's design for marriage while treating all with dignity and loving our neighbors as ourselves. 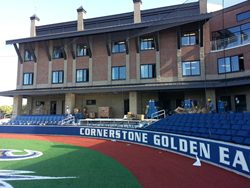 Cornerstone University recently released a statement in response to the Supreme Court decision on same-sex marriage. The following is the statement that can also be found on its website http://www.cornerstone.edu in the news section reaffirming its stand that God defines marriage between a man and woman.

The statement reads:
"While we recognize and respect the Supreme Court's authority to adjudicate controversial issues, we also recognize that the Court's recent decision on gay marriage is indicative of a general shift in American culture on questions of human sexuality and individual rights.

As a Christ-centered community that is committed to positively impacting our culture, we at Cornerstone University observe these developments with great interest. And, in light of this decision we reaffirm our commitment, as stated in the Cornerstone Confession, that Adam and Eve's "union as man and woman models God's design for marriage and perpetually stands as God's loving and righteous will for all sexual intimacy" (CU Confession, approved by the Board of Trustees, 2011).

We welcome and are encouraged by the Supreme Court's affirmation of religious freedom in its ruling. In the words of Justice Kennedy, "The First Amendment ensures that religious organizations and persons are given proper protection as they seek to teach the principles that are so fulfilling and so central to their lives and faiths, and to their own deep aspirations to continue the family structure they have long revered."

We look forward to this protection for the free expression of our Biblical convictions as we continue to embrace the wisdom of two thousand years of both church and cultural agreement regarding the sanctity of marriage in its traditional sense.

In the spirit of Christ, we will hold our beliefs recognizing the dignity of all as God's created beings and will seek always to love our neighbors as ourselves.

Above all, we affirm our confidence in Jesus Christ as Lord of all nations and we will seek to live faithfully as agents of Christ's love and justice in our world."