On July 3rd, 2015, this year’s annual Red, White and Boom! Festivities in Columbus will include two special performances by Team Fastrax™. The Team is scheduled to perform not only their American Flag Skydive, but also their pyro performance. 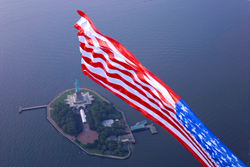 The Declaration of Independence and our resulting freedoms are what truly set us apart from other countries. God Bless America.

Red, White & Boom! is located in downtown Columbus surrounding the riverfront and Arena District areas, and is the largest fireworks display in Ohio. At 8:45pm Team Fastrax™ will be performing their famous American Flag skydive with the largest American Flag flown by a skydiver, an amazing 7,800 sq. ft. patriotic display not found anywhere else. To top it all off, at 9:40pm, just prior to the fireworks start, Team Fastrax™ will be performing their much anticipated pyro jump. Six skydivers will exit the aircraft with fireworks strapped to their legs, and will freefall down in an amazing aerial display. This performance will be fed live to NBC4 from the Team Fastrax™ live air-to-ground feed, so you can view all the action from the sky.

John Hart, owner of Start Skydiving, and member of Team Fastrax™, said “We are honored to be performing our American Flag and pyrotechnics skydives on such an important day in America’s history. The Declaration of Independence and our resulting freedoms are what truly set us apart from other countries. God Bless America. ”

The Fireworks display and Team Fastrax™ demonstration will all be available to watch on NBC4. According to the Red, White and Boom website, the event goes from noon to 11pm that night. Activities include a 6pm parade, inflatables for kids, Taste of Boom! Featuring Columbus’s finest restaurants, and finally the big fireworks show at 10pm.

Team Fastrax™ is sponsored by Selection.com®, a leading provider of criminal background checks and pre-employment screening services. Team Fastrax™ is the most ambitious professional skydiving team in the world. The parachute demonstration team has a roster of more than twenty-nine active members, with a collective of more than 300,000 skydives. Team Fastrax™ has performed exhibition skydives all over the world for audiences large and small as a patriotic display or as a product promotion.

For more information about the Red, White & Boom! Fireworks, visit their website.