Geek Style is front and center with Her Universe 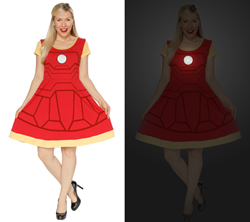 Fangirls can now have this Iron Man cap-sleeve dress, reflecting his armor, to look super stylish on their next outing – making the geek fashion world a better looking place! And it glows-in-the-dark!

We are excited to bring our Her Universe boutique back to San Diego Comic-Con,” said Ashley Eckstein. “We have an assortment of casual and dressy options to beautifully express your fandom and Flaunt Your World!

Groundbreaking fangirl fashion company, Her Universe™ announced today that it will be returning to San Diego Comic-Con International with all of its most popular geek girl styles. The convention will be held at the San Diego Convention Center from July 9th to the 12th. Actress and Her Universe Founder, Ashley Eckstein, revealed that Her Universe will debut several new designs and will offer its most popular dresses, cardigans, fashion tops, skirts, hoodies, jewelry and much more from Star Wars, Marvel, Star Trek, Studio Ghibli and Nerdist. As with previous years, the Star Wars Her Universe boutique will be located in the Lucasfilm Pavilion (#2913Q). This year, however, fans will find a second Her Universe boutique (#1317) filled with other fangirl fashions from Marvel, Star Trek, Studio Ghibli and more.

“We are excited to bring our Her Universe boutique back to San Diego Comic-Con,” said Ashley Eckstein. “Elevating our product like it’s never been before; we have an assortment of casual and dressy options to beautifully express your fandom and Flaunt Your World!”

“We are thrilled to be expanding our footprint at SDCC this year, with two boutiques” added Michael Rego, Chief Executive Officer of The Araca Group. “We are continuing to develop and produce merchandise for some of the most iconic and beloved brands in the world. We are looking forward to another great year at SDCC.”

Her Universe, which is celebrating its 5th anniversary this summer, will be producing the second annual “geek couture” Her Universe Fashion Show with its partner, Hot Topic, for this year’s San Diego Comic-Con. The event, which will offer two winners the opportunity to design a fashion collection with Her Universe for Hot Topic, will be held July 9th, 6pm, at the Manchester Grand Hyatt Hotel in San Diego. Her Universe and Hot Topic will also be presenting a special screening of Studio Ghibli’s beloved film Spirited Away, hosted by Ashley Eckstein, after the fashion show, on Thursday, July 9th at 9pm at the Horton Grand Theatre in San Diego’s Gaslamp Quarter. Entry to the screening requires a ticket. Drawings for entry tickets at the Horton Grand Theatre will be held on Thursday, July 9th at 9am in the Autograph Area (upstairs in the Sails Pavilion) of the San Diego Convention Center. In addition, fans will be able to catch Ashley Eckstein on the following panels, Friday, July 10th, at San Diego Comic-Con:

Her Universe (http://www.heruniverse.com) was launched in 2010 by actress and entrepreneur Ashley Eckstein and The Araca Group, a leading theatrical production and brand management company. Ashley and Araca created Her Universe to address the expanding market of female sci-fi and fantasy fans. They entered their first agreement with Lucas Licensing to develop and produce a line of female-centered Star Wars apparel and accessories. The success of that line was followed up with a collection for BBC Worldwide for Doctor Who, CBS Consumer Products for Star Trek, Nerdist Industries, Marvel, Hasbro for Transformers and Studio Ghibli. You can learn more about Her Universe and purchase the current line of fangirl apparel and accessories by going to heruniverse.com and by following Eckstein & Her Universe on Facebook (https://www.facebook.com/HerUniverse) and Twitter (https://twitter.com/HerUniverse).

This stunning Star Trek: TNG uniform dress from Her Universe, based on Deanna Troi's actual costume, can be worn as “everyday cosplay” especially when you're “sensing a powerful mind” at work or play!

This striking Her Universe black & white stylish top has a subtle nod to everyone’s favorite superhero group. Embroidered on the collar is the famous Avengers symbol followed by the line ASSEMBLE.

Her Universe has assembled all the Avengers on this pop color skirt but with just a subtle hint of the hues that make up each of their famous looks.

"Make it so" with this stunning Starfleet-style Garnet Cardigan from Her Universe! Captain Jean-Luc Picard would approve of this quality-made cardigan reflecting the fashion of "The Final Frontier."

Designed by last year’s Her Universe Fashion Show winners, with Ashley Eckstein, for Hot Topic’s Marvel Collection, this Her Universe Thor Navy dress is available at SDCC while supplies last.

Agent Peggy Carter is a true hero and now you can honor Peggy with this Her Universe tee featuring her patriotic profile (on the front) and her quote on the back.

Designed by Chris Hardwick, con-goers don't have time for disorganized hoodies and backpacks, so Her Universe has streamlined them into the Ultimate Convention Hoodie.

Already an Internet sensation, the Force is definitely with this popular Her Universe lightsaber skirt and shirt which will be available at the Her Universe Boutique #2913Q at SDCC.

Fangirls can now have this Iron Man cap-sleeve dress, reflecting his armor, to look super stylish on their next outing – making the geek fashion world a better looking place! And it glows-in-the-dark!