Vector Marketing District Manager Daniel Rivera was so impressed with his church’s sponsorship of an African orphan that he challenged his office to participate in the program as well. Now, his district donates a portion of its revenue to Restoration Church’s outreach program RHope, and has a goal of sponsoring 10 children in Africa and India by the end of the year. 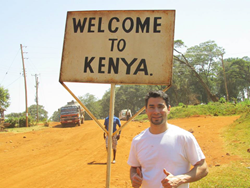 And that's what I want to teach my team: It’s not so much about us. It's about what we can do for others.

Vector Marketing District Manager Daniel Rivera is on a mission to create charitable organizations and programs to help needy children. And he’s also inspiring his team of sales representatives to give a helping hand to improve the lives of those who need it the most. In 2014, the charitable district began donating a portion of its revenue to pay living and educational expenses for a Kenyan orphan. They have a goal of sponsoring nine additional children in Africa and India by the end of 2015.

Rivera, 28, attends the Wichita, Kansas-based Restoration Church. A graduate of Newman University, he’s spent five years as district manager for Vector Marketing, the sales arm of Cutco Cutlery. In 2014, Rivera went with his church to Kenya on a philanthropic outreach mission. While there, he met Daniel, a Ugandan child who his church had been sponsoring through a global outreach program called RHope.

After the mission, Rivera decided that his Vector district should sponsor a child of its own. He and his team chose to help Selah Kerubo of Kenya. She and her five siblings were orphaned in 2007 when both of their parents died from HIV/AIDS. In addition to the district donations, individual Cutco sales reps and customers can also donate to Selah through RHope.

Rivera has set an aggressive goal of sponsoring a total of 10 children this year. He hopes his philanthropic district’s efforts will grow and have a lasting impact on the lives of people who have suffered incredible loss and deprivation.

“To give them hope for a brighter future gives me real fulfillment and has a real impact on my personal life,” he said. “And that's what I want to teach my team: It’s not so much about us. It's about what we can do for others.”

About Vector Marketing:
Vector Marketing is the sales arm for Cutco Cutlery, a 65-year-old company with headquarters and manufacturing facilities in Olean, New York. Vector sells Cutco through a national team of college students, who are trained to do in-home and virtual demonstrations on a pre-set basis. Vector Marketing has over 200 locations nationwide and works with students of all majors with little-to-no professional experience.