Biosecur Lab Launches FOODGARD™, a Revolutionary Natural Antimicrobial and Preservative for Use in Food 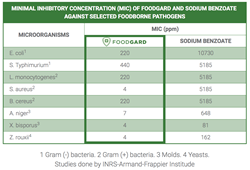 July 8, 2015 -- BIOSECUR LAB INC., a privately held Canadian company dedicated to the creation and development of active antimicrobial ingredients, today announced the launch of FOODGARD™, a natural antimicrobial and preservative for use in food. This revolutionary new offering is scheduled to launch in the U.S. market during the Institute of Food Technologists (IFT) Annual Meeting & Food Expo 2015 in Chicago, which takes place July 12-14.

The culmination of four years of research, development and testing, FOODGARD provides a proven ‘Clean Label’ alternative to chemical preservatives. The development process was facilitated by Dr. Dieter Elsser-Gravesen, who heads up ISI Food Protection in Denmark and conducted extensive testing of the FOODGARD formulation.

“Lab tests confirm that FOODGARD is highly effective as an antimicrobial and preservative, making it a must to integrate in many food systems,” said Dr. Dieter Elsser-Gravesen.

FOODGARD’s efficacy is further supported by the study of Research Laboratories in Sciences, Applied to Food of INRS - Institut Armand-Frappier in Canada, which has completed extensive ‘In Vitro’ and ‘In Situ’ tests on FOODGARD against gram (–) and gram (+) bacteria, total aerobic microflora and yeasts/molds in comparison with sodium benzoate. A video summarizing these findings may be viewed here.

“In vitro results show that FOODGARD is 10 to 1000 times more efficient than sodium benzoate against eight tested pathogens (Gram (+), Gram (-), yeasts and molds,” said Monique Lacroix, Ph.D and Professor of INRS - Institut Armand-Frappier. “It is the first time in my career that I have witnessed a natural compound eliminate as much pathogenic bacteria, yeast and mold even when it is used in very low dosage,” Lacroix concluded.

On June 26, 2015 BIOSECUR LAB received FDA-GRAS status for FOODGARD, described as a “citrus extract” for use as an antimicrobial and preservative in all non-standardized food categories. This approval was significant in that it confirms that FOODGARD is safe for human consumption, providing a chemical-free, ‘clean label’ alternative for use by food manufacturers and processors.

Based upon AIBMR Life Sciences, Inc. understanding of FDA food labeling regulations, it is the professional opinion of Dr. John Endres, from AIBMR that FOODGARD may be labeled as a ‘Natural Citrus Extract’ (as a preservative).

BIOSECUR LAB will offer samples of FOODGARD and technical information during the IFT Annual Meeting and Food Expo at booth #5080. Product information is available through http://www.foodgard.com. To contact a representative, email info(at)foodgard(dot)com or visit the website.

About BIOSECUR LAB
BIOSECUR LAB Inc. a Canadian privately held company dedicated to the creation and development of active antimicrobial ingredients with complex bioflavonoids / polyphenols derived from citrus fruits. BIOSECUR LAB’s ongoing research with contracted laboratories and with leading university researchers continues to identify and define all the potential applications for the company’s products.