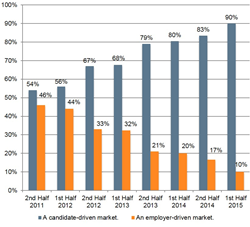 9 out of 10 MRINetwork recruiters feel we are in a candidate-driven market.

This is a candidate-driven market where the best talent need to be convinced their lives would be better if they were in that particular role.

Workforce expansion is a priority for many companies throughout 2015, yet employers are struggling to recruit the best talent, according to new data from the 2015 1st Half edition of the MRINetwork Recruiter Sentiment Study. The biannual employment landscape survey, which polled 347 MRINetwork recruiters worldwide from the organization’s approximately 600 franchised offices, reveals the executive, managerial and professional labor market has become increasingly candidate-driven since 2011, and particularly in 2015. This workforce reality is becoming more apparent to top candidates who typically have multiple job offers and the advantage in the applicant process. Rejected job offers are on the rise and a growing number of companies are losing shortlisted candidates to other organizations. Survey data suggests employers are feeling the pressure of the candidate-driven market, forcing many to reevaluate their recruitment efforts, to attract and retain the specialized talent needed to move these organizations forward.

According to the survey, 90 percent of respondents defined the talent market for the executive, managerial and professional sector as candidate-driven, a 36 percentage point increase from the second half of 2011. As one recruiter noted, “The impact of the candidate-driven marketplace has been enormous especially over the course of the last year. The biggest concern is that candidates understand this, but companies do not.”

Because many companies still have not caught on, they continue to lose great candidates due to lengthy hiring practices, below-market salaries, weak branding efforts, and an inability to sell open roles and career advancement opportunities. Year-over-year survey data shows rejected job offers are growing, primarily because top performers are accepting offers with other companies (37 percent), and are being presented with disappointing compensation (25 percent). Additionally, the time between the first interview and the rejected offer is also shrinking, with a nine percentage point increase from the second half of 2013, for candidates that rejected offers within two weeks of the first interview.

“Companies have to move faster and understand that they are competing with other companies,” said a survey respondent. “They have to sell themselves. It’s not 'Why do you want to work here?’ It’s ‘Here’s why you should want to work here and what we can do for your career.”

Ultimately both the hiring landscape and approaches to talent management are shifting. Candidates are demanding more from prospective employers in their ability to articulate and provide opportunities for upward mobility, not just fulfillment of an open role. This is becoming clear as the length of time that employees stay with a company is shrinking. Data from the survey shows that it is not just Millennials who are changing job frequently. Gen-Xers are also doing a fair share of job hopping, signifying that job changes every two years may gradually be losing their stigma.

Additional highlights and conclusions from the MRINetwork survey:

Although the study results demonstrate the labor market is highly favorable toward top performers in the executive, managerial and professional space, recruitment and retention will continue to be challenging for overall hiring as the job market expands. A fundamental shift is taking place in the way in which candidates expect to be recruited, and companies will continue to lose out on the brightest talent if they are not able to adjust their hiring and retention practices.

About the MRINetwork Recruiter Sentiment Study:
The 2015 1st Half MRINetwork Recruiter Sentiment Study is based on a web-based survey, conducted between June 2-10, 2015, with a total of 347 recruiters responding. The survey was conducted by MRINetwork and compiled by Nysha King (215.282.8821 | nysha(dot)king(at)MRINetwork(dot)com), Media Relations Specialist for MRINetwork. This was the 8th edition of the study, which is conducted on a biannual basis. Parties interested in viewing the most recent report can download the study at MRINetwork.com/RecruiterSentiment.

About MRINetwork®:
Management Recruiters International, Inc., branded as MRINetwork®, is one of the largest executive search and recruitment organizations in the world. A subsidiary of CDI Corp. (NYSE:CDI), a global provider of engineering & technology solutions and professional staffing services, MRINetwork has approximately 600 offices in over 40 countries. Visit MRINetwork at http://www.mrinetwork.com. For franchising opportunities, visit http://mrinetwork.com/franchise-info/opportunity/.