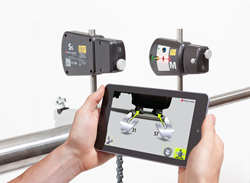 VibrAlign, the exclusive US distributor of Fixturlaser and ACOEM AB industrial maintenance products, has announced their latest offering in the laser shaft alignment market: The FIXTURLASER Laser Kit.

The FIXTURLASER Laser Kit is a wireless laser shaft alignment system, featuring two laser transmitter-detector units that pair via Bluetooth to the user’s iOS or Android device running the Laser Kit app. The app is designed to be installed on an iOS or Android mobile device, which replaces the traditional display unit. The app communicates with the laser transmitter-detectors via Bluetooth and performs all the alignment calculations. The V-Brackets come pre-assembled with chains and can be mounted on shafts up to 6 inches in diameter. Extension chains are available to accommodate larger shafts. The Laser Kit is designed as an economical solution to perform horizontal shaft alignments, available for direct purchase at VibrAlign’s website.

While the Laser Kit is Fixturlaser’s first product to feature “smart” laser shaft alignment, it is their second product to use smartphone app technology to augment the shaft alignment process. Released in mid-2014, the FIXTURLASER Dial Indicator Kit combined analog dial indicators with the free Dials app that handled the necessary mathematical calculations involved in dial indicator alignment. The Laser Kit takes this idea a step further by implementing the entire alignment process in a simple, graphical app. With this app-driven approach that allows the user to “bring-their-own” display unit VibrAlign can offer the Laser Kit at a lower price than other products that include the display unit in their cost.

About VibrAlign:
VibrAlign was started in 1983 as a vibration and alignment service organization and later became a distributor of equipment which, appropriately, equipped the company to better serve its customers. For more than thirty years, VibrAlign has been growing across the country. Today the company, headquartered in Richmond, VA and operating out of local offices in every major region of the U.S., is out to empower mechanics and Realign America.