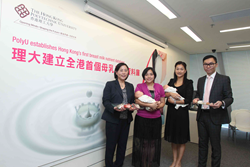 Our research results reveal that the breastmilk in Hong Kong lactating mothers can meet the growing needs of infants in Omega-3 fatty acids.

Breastfeeding has become more common all across the world in recent years, however, breastfeeding rate has remained low in Hong Kong. One of the main reasons is that Hong Kong mothers worry about the nutrient adequacy of their breast milk to meet the growing needs of the infant. Local healthcare professionals also lack reference of breast milk composition of local mothers in their daily practice. In light of filling the data gap of Hong Kong breast milk nutrition research, the research team at PolyU embarked on the study in breast milk research, with an aim to understanding the diet and nutritional characteristics of breast milk in Hong Kong lactating women, so as to analyze how daily diet affects the nutritional composition of breast milk.

The research team at PolyU recruited breastfeeding mother participants between April and May 2014. They collected breast milk and conducted a 3-day diet survey with the 74 subjects between May and August 2014, and subsequently tested the level of polyunsaturated fatty acids (DHA, EPA and AA) of the breast milk collected between September 2014 and June 2015. Results revealed that the DHA level in more than 80 percent of the breast milk collected meets the adequate intake level for 0 to 36 months old infants recommended by the Chinese Dietary Reference Intakes (DRIs) 2013 (based on daily consumption 750ml) , which could supply sufficient DHA to infant to help their brain and vision development. In addition, the average daily intake of DHA as well as DHA+EPA of participants also exceeds the adequate intake level recommended by the Chinese DRIs 2013, including participants who did not take supplement.

According to the diet survey, the PolyU research team discovered that salmon was most frequently consumed by participants among other fish types, amounting to an average of 18 times per participant in three months, which means they consumed salmon once every five days. The survey also showed that the breastfeeding mother participants consumed sashimi or sushi once every five days. Mr Gordon Cheung, Registered Dietitian and Project Fellow of the Food Safety and Technology Research Centre under PolyU’s Department of Applied Biology and Chemical Technology, suggested that breastfeeding mothers consume adequate amount of meat, fish, egg or their alternatives, and select fishes which are rich in omega-3 fatty acids and low in methyl mercury. He suggested the weekly consumption for fish should be 4 to 12 taels which cooked fish has relatively lower risk in food safety. Also, selecting seafood rich in iodine, consuming seaweed occasionally and consuming food rich in calcium as well as drinking water and soup frequently can help to develop a healthy lactating diet, which can in turn enrich nutrient in breastmilk to support infant growth.

Dr Wong Man-sau, Associate Professor of PolyU’s Department of Applied Biology and Chemical Technology (ABCT) and Deputy Director of Food Safety and Technology Research Centre (FSTRC) said, “Our research results reveal that the breastmilk in Hong Kong lactating mothers can meet the growing needs of infants in Omega-3 fatty acids. As a result, we strongly urge mothers to consider breastfeeding. Not only does it serve as a food source for infants, it helps develop mother-child relationship, allowing children to grow happily and healthily”.

The research team will start the second phase of the study in the future 6 months. The second phase included testing the level of essential element (calcium) and trace elements (zinc, iron, iodine and selenium) of the breast milk collected and investigating the nutrient level of the food items recorded in the 3-day diet survey. These will help the Laboratory for Infant & Child Nutrition build up a more comprehensive breast milk database in Hong Kong, promoting collaboration between academia and the government in providing information on breast milk and mother and infant nutrition to the general public and promoting the advantages of breastfeeding.