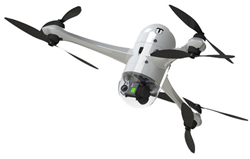 "NimbeLink is thrilled to be part of the Tayzu UAV project in partnership with Verizon. The Skywire™ end-device certified modem integrated in the Tayzu UAV demonstrates a new leading edge application of cellular connectivity.” – Scott Schwalbe CEO

Tayzu Robotics, a manufacturer and developer of Unmanned Aerial Vehicles (UAV), has entered into a partnership with Verizon Communications to integrate cutting edge flight control options into Tayzu's already advanced line of UAVs. At the center of this new technology is the Skywire 4G LTE Module by NimbeLink. This revolutionary piece of equipment will make the collection and monetization of large amounts of data from autonomous UAV flights possible on Tayzu crafts via a cellular network.

Tayzu crafts that have been enabled to use the Skywire will be able to fly programmed flight paths at the press of a button. These programmed flights can be initiated from anywhere in the world. Tayzu Robotics is also developing technology that will enable the crafts to land in a charging station that will allow crafts to recharge themselves. Without the need of a pilot or an operator to change the battery, the craft will be able to fly indefinitely on its own. Users will need to do no more than program a flight path and press a button to have a craft that will fly and charge itself without any additional operation. All future Tayzu crafts will be able to support this ability.

The possible use cases for this new technology are limitless. Fully autonomous drones will be invaluable for security purposes as they will be able to offer 24-hour observation of large areas. Migration patterns, erosion rates, and much more can be closely monitored with programmable flight paths.

Tayzu's new line of crafts, from the nimble Quadra line to the heavy lift X-8 Titan will be made available for purchase soon.

Tayzu Robotics specializes in the production and customization of aerial drones. Their team of electrical engineers, scientific researchers, and aeronautical designers are dedicated to pushing the limits of aerial robotics through innovation and technology. Working with companies like NASA, JPL, SpaceX, and The BBC Tayzu Robotics is revolutionizing the way that Unmanned Aerial Systems are designed and used.