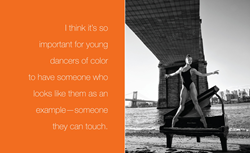 "It seems to me that her fierce determination has less to do with herself and so much more to do with becoming a role model for others." Richard Corman, Photographer

Corman captured what he called the “integrity, majesty, and pure beauty” of Copeland in the sunrise session under the Brooklyn Bridge. He had worked with the ballerina before in a shoot with philanthropist and former professional football player Sean James, but he couldn’t have known the impact that these dynamic photographs would have through the pages of an inspirational new book, Misty Copeland: Power and Grace. (978-0692493236 trade paper, 978-0692493250 e-book, $12.99, 60 pg, 7.5 x 9.25, 54 B&W photos, also in e-book, published by Michael Friedman Group Inc., distributed by Ingram Publisher Services.)

Misty Copeland is a renowned ballet dancer who has just broken through cultural and physical barriers to become the first female African-American to be promoted to principal dancer at the American Ballet Theatre and now she is adding Broadway to her list of accomplishments. Misty has proven adversity can be conquered by reaching higher and working harder to define what is humanly possible, regardless of the path one chooses to follow their dreams. Despite her fame, she remains accessible to fans (700,000 followers) with the mantra that “it’s so important for young dancers of color to have someone who looks like them as an example—someone they can touch.”

Through the stunning black-and-white photography of Richard Corman and Misty’s own words, her inspiring message of hope, strength, and focus speaks to young girls, athletes, dancers, and anyone who believes in the American dream: “You create your destiny. Hard work, dedication, sacrifice, and taking risks create amazing opportunities.”

In the book’s introduction, Cindy Bradley, Misty’s ballet teacher who discovered and encouraged Misty to develop her talent and follow her heart, gives context to the obstacles and challenges that helped Misty find her power and achieve success. “Finding your power doesn’t have to be scary. Instead, it makes you feel in control, strong, and proud,” Misty says.

Misty Copeland’s words and powerful image speak volumes in Misty Copeland: Power and Grace, inspiring and empowering new and old fans to work hard because “the path to success is not as fixed and unflexible as you think.” More images, footage, and insider stories can be seen on Facebook at: MistyCopelandPowerandGrace.

About the Photographer:
Photographer Richard Corman has been capturing poignant moments of human triumph for over three decades. Rolling Stone refers to his photographs as “iconic.” Documentarian Ken Burns says Corman’s versatile body of work is an “artistic vision dedicated to the highest aspirations of human endeavor . . . the photographs record in big moments and small, among the famous and ordinary, the gifted and challenged, larger truths relevant to all of us.” Corman has worked with Nobel Peace Prize recipients Nelson Mandela and Elie Wiesel; actors such as Robert De Niro, Meryl Streep, and Daniel Craig; elite athletes who inspire greatness, like Muhammad Ali and Michael Jordan; and writers and artists like Kurt Vonnegut, Basquiat, and Naguchi. http://www.RichardCorman.com

"Humility, decency, grace, beauty, brilliance, imagination, discipline, and foresight have given Misty Copeland a voice that is resounding and speaks volumes about her drive to make a difference in the world today. Her talent is genius and her generous soul is equal to that ability. As her fame skyrockets, it seems her benevolence and accessibility also expands…so rare in our world of celebrity.

"Young girls of all colors aspire to her voice and talent as Misty is transforming the hue of classical ballet by her own example. She has bypassed all the stereotypes of classical ballet and in doing so, has inspired so many. Her growing fame as a dancer clearly gives her this platform, but like visionaries past, she has accepted this role and demanded that others listen!

"Misty does embrace the spotlight. The ballet does shine a dramatic light on her and in many respects is a solitary expression. However, it seems to me that her fierce determination has less to do with herself and so much more to do with becoming a role model for others." —Richard Corman

"Misty’s journey should inspire all of us—not only that we have tremendous inner potential to achieve our dreams, but that whatever we feel passionate about, we can find a voice to change the world." —Cindy Bradley