New study by PsychTests.com reveals that social insight can be used to take advantage of others if not tempered by other emotional intelligence traits. 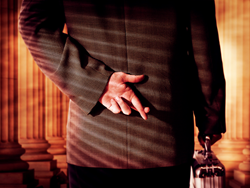 Social insight without empathy can be a toxic combination.

Social insight is a valuable skill, but it must be balanced out with empathy

Social insight, a key factor in emotional intelligence, is largely considered a valuable skill. Being able to perceptively and accurately appraise people and anticipate what they might say or do allows a person to adjust their own behavior and social approach accordingly, avoiding awkward missteps, hurt feelings, and conflict. But is there a dark side to social insight? Can a keen understanding of human nature be used for evil? Research by PsychTests reveals that social insight, if not complemented by empathy and a strong sense of social responsibility, can lead to dishonest, deceptive, and manipulative behavior.

Researchers at PsychTests analyzed the profiles of people who took their Machiavellian Personality Test, focusing specifically on 60 individuals who are socially insightful but not socially responsible, and who lack empathy.

In order to get something they want…

In order to move up the career ladder…

“There have been several debates going on about the ‘dark side’ of emotional intelligence; and theoretically, it makes sense,” explains Dr. Jerabek, president of PsychTests. “Take con artists as an example. They have a good understanding of human nature; they know how to play to people’s emotions and are very socially adaptable. They understand what motivates people’s emotions and behaviors and use it to their advantage. The only thing that differentiates them from healthy, emotionally intelligent people is their lack of empathy. These master manipulators and deceivers put themselves first, will do anything to get what they want, and feel little if any remorse. Social insight is a valuable skill, but it must be balanced out with empathy.”

Want to find out if you have a touch of Machiavellianism? Go to http://www.queendom.com/tests/take_test.php?idRegTest=3851

Professional users of this assessment (therapists, life coaches and counselors) can request a free demo of the Machiavellian Personality Test or any other assessments from ARCH Profile’s extensive battery: http://hrtests.archprofile.com/testdrive_gen_1

Is there a dark side to emotional intelligence?People who have a good social insight but lack empathy can be manipulative, deceitful, and egotistical.