The Americans with Disabilities Act is a landmark law, which set Political and economic agenda moving forward; more work to do. 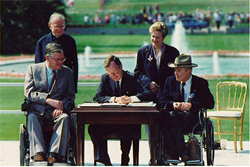 As the country approaches, celebrates, and moves beyond the 25th anniversary, disability activists, advocates, and allies are clear about goals.

Last Monday, President Obama and Vice President Biden hosted disability rights leaders at the White House to address ADA25 (25th Anniversary of the Americans with Disabilities Act). “America is Stronger and More Vibrant; It is a Better Country because of the ADA,” said the president.

This proved support for Americans with disabilities and allies to this movement to propel America beyond the July 26th celebration, and onto long-term sustainable change in economic empowerment, employment, transportation, independent living and community engagement.

As the country approaches, celebrates, and moves beyond the 25th anniversary, disability activists, advocates, and allies are clear about goals: At its core, the ADA is full social integration for 57 million Americans with disabilities. Access for all Americans is the cornerstone of this, the world’s first civil rights law for people with disabilities in the workplace, marketplace and communities across the nation.

For individuals, businesses, government and organizations celebrating ADA25, and/or wanting to become involved in the next chapter of this movement, check out many opportunities through the end of July. Individuals, organizations, government and faith communities are also invited to sign the ADA Pledge. For daily updates on ADA activities, visit http://www.ada25chicago.org/news

July 26: The 25th Anniversary of the ADA: 12:30 pm National Museum of American History. After 22,000 miles, 30 states and over a hundred stops, ADA Legacy Bus finally arrives in DC with widows of Justin Dart and Evan Kemp (on stage with President George H.W. Bush as he signed the ADA into law). Yoshiko Dart and Janine Bertram Kemp – both disability leaders will lead the rally. “Larger-than-life” Justin Dart puppet and Disability Rights Museum on Wheels join the rally with 1,000 disability rights activists and allies projected in attendance.

About The ADA Legacy Road to Freedom Bus Tour: Produced by The ADA Legacy Project, Disability Rights Center, ADA National Network, the Museum of disABILITY History, and the ADA Legacy Tour. The Tour began in July of 2014. It will enjoy its grand finale in Washington, D.C., on July 26, 2015, exactly 25 years after President George H.W. Bush signed the Americans with Disabilities Act into law! The ADA Legacy Bus will have traveled to 33 states by the end of July 26, 2015! The Tour is designed as a unique and dynamic chance to learn more about the disability rights movement, and what the ADA means/has meant for the American experience. The ADA Bus brings the work of the great photographer, Tom Olin to life. For those who are moved to action by this powerful display, we will also provide the opportunity to sign the ADA Pledge as well as other materials and community tools!

About The ADA Legacy Project: Its mission is to honor the contributions of people with disabilities and their allies by preserving the history of the disability rights movement, by celebrating its milestones, and by educating the public and future generations of advocates.