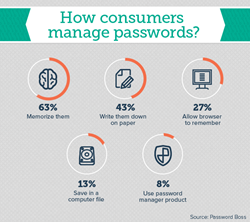 More than half of Americans (54 percent) agree that they need to change their password habits.

Despite the fact that four out of ten companies were hacked in 2014, most Americans still keep track of their passwords in unsafe ways. According to a Harris Interactive survey of 2,030 U.S. adults conducted for Password Boss*, the most common method that American consumers use to manage passwords for their online accounts is simply their memory (63 percent). Two-in-five say that they write them down on paper, while one-quarter allow their browser to save their passwords for them. Only eight percent use a password manager product.

The survey also found that 59 percent admit to reusing passwords because it is too hard to remember them, and that more than half of Americans (54 percent) agree that they need to change their password habits.

“The results from the survey indicate that, in general, consumers are very passive and somewhat contradictory when it comes to the management of their online account passwords, despite the increasingly large and disruptive impact that data breaches have on consumers’ lives,” said Password Boss founder and CEO Steve Wise. “The fact that most consumers really have no system to manage their accounts other than memory or pen and paper suggests these methods are easier than any tool available. Our mission is to help consumers change their password habits with the easiest-to-use app for anyone that has trouble remembering their passwords.”

A number of differences exist in the way consumers manage their passwords by demographic groups.

Differences also exist in the use of a password manager product by demographic groups.

Password Boss is a free password manager and digital wallet available for download on Windows 8/7/Vista/XP-based PCs and tablets, all iOS devices and all Android devices. A premium (paid) version with features such as online backups, 2-step authentication and unlimited, secure password sharing is available for $29 per year. Complete pricing details can be found at http://www.passwordboss.com/pricing/.

Password Boss is also available at no charge to charitable organizations, schools, universities and religious organizations.

*Abbreviated Methodology
This survey was conducted online within the United States by Harris Poll on behalf of Password Boss from January 23-27, 2015 among 2,030 adults ages 18 and older. This online survey is not based on a probability sample and therefore no estimate of theoretical sampling error can be calculated. For complete methodology, including weighting variables, please contact press(at)passwordboss(dot)com.