After years of watching other states attempt to position themselves as autumn destinations, the Vermont Department of Tourism and Marketing has thrown down the gauntlet and declared Vermont the home of the World’s Best Foliage. 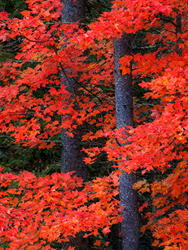 "No one does foliage better than Vermont." --Vermont Governor Peter Shumlin

After years of watching other states attempt to position themselves as autumn destinations, Vermont has thrown down the gauntlet and declared itself the home of the World’s Best Foliage.

“No one does foliage better than Vermont,” declared Vermont Governor Peter Shumlin. “Three-quarters of our state is forested, and we have the highest percentage of maple trees in the country. With our flaming reds, blazing oranges and glowing yellows, we have the most vibrant fall colors in the world.”

In previous years, states as far away as Michigan, Pennsylvania, and Arizona have claimed their fall season was as pretty as Vermont’s. “Clearly, we’re the bar,” said Megan Smith, Commissioner for the Vermont Department of Tourism and Marketing. “Our fall advertising campaign will articulate the myriad reasons we have the World’s Best Foliage. Our hope is that people will be inspired to come see it for themselves.”

Smith added that Vermont’s fall campaign isn’t just about bragging rights. Visitors spend $460 million during the foliage season, which represents about a quarter of overall visitor spending each year. Nearly 3.5 million people travel to Vermont in the fall to experience its unique working landscape of bucolic villages, pastoral meadows, and forested hillsides.

Beginning Monday, August 3, the state's official tourism website, http://www.VermontVacation.com, will feature some of the many reasons why Vermont has the World's Best Foliage. To help visitors plan their trip during “peak” season, the website will offer weekly foliage reports, Best Bets for driving tours, and a foliage tracker. The website will rely on foliage information from the state’s Department of Forests, Parks and Recreation and its commissioner, Michael Snyder. Snyder is a well-regarded forester, and with over 30 years of professional experience, has earned the title of Vermont’s official Foliage Forecaster.

“Predicting fall’s color changes is part science and part luck,” admitted Snyder. “We know the science of color change and the factors that influence it, but we don’t know exactly how it will unfold in any given year. The good news is, our foliage is like a day on the slopes—when it’s good, it’s great. And even when it’s a bit off, it’s still really good.” Snyder says Vermont’s abundant spring rain and summer sunshine have created the right conditions for a spectacular fall in 2015.

To see the top reasons why Vermont has the World’s Best Foliage, go to http://www.VermontVacation.com/worldsbestfoliage. Images can be found in the media room. B-roll is available on request.