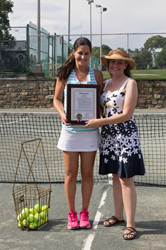 I hope my story will have a positive impact on the community and will send a message that anyone can achieve greatness if they set their mind to it.

“Jamie Loeb is an inspiration to aspiring young athletes,” said Village of Ossining Mayor Victoria Gearity. “We are delighted to have a chance to celebrate her success, and grateful for her willingness to share her skills with kids in her home town.”

“I am honored that my accomplishments are being recognized by the Village and Town of Ossining, the place where I grew up and my current residence,” said Loeb. “Tennis is a huge part of my life and I have sacrificed so much to be where I am now. I wouldn't be the person and athlete that I am without the support from my family, friends and coaches.”

Earlier in 2015, Loeb was named the Atlantic Coast Conference Women’s Tennis Player of the Year for the second consecutive season and is one of only seven multiple-time winners in the history of the conference.

“My goal is to help the youth and hopefully get them to live a proactive and healthy life through sports,” she shared. “I hope my story will have a positive impact on the community and will send a message that anyone can achieve greatness if they set their mind to it.”

For information on recreational activities and programs available through the Ossining Recreation & Parks Department, call 914-941-3189 or visit http://www.villageofossining.org.

About the Village of Ossining
On April 2, 1813, the Village of Ossining became the first incorporated village in Westchester County to be state-chartered. Today, Ossining is a culturally diverse, affordable place to live, rich in both history and natural beauty. Approximately 25,600 people reside in the three and one half square miles of this historic Village on the Hudson River, which boasts extensive shopping, recreational programs, educational enrichment opportunities, and excellent municipal services. Ossining’s role in New York’s heritage has been recognized by its inclusion, as one of only 14 areas, in an Urban Cultural Park System designed to attract visitors to the State. Visit http://www.villageofossining.org for more information.