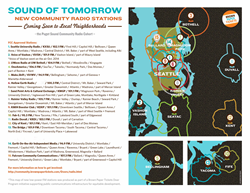 Youth will take over a pop-up radio station and 8-foot-tall radio tower at the flagship event for National Radio Day, Aug. 20. Brown Paper Tickets is co-creating the first coast-to-coast celebration honoring National Radio Day with non-commercial radio stations in more than 30 cities across America. The Seattle event also offers an opportunity for anyone to suggest programming ideas for seven new hyper-local low-power FM radio stations recently licensed by the FCC to begin broadcasting across 90% of Seattle neighborhoods.

“These new media outlets will be community resources, like The Seattle Public Library,” said Sabrina Roach, Doer for Brown Paper Tickets and lead organizer for the coast-to-coast celebration of National Radio Day. Roach’s role as a Doer affords her the opportunity to work full time on building capacity for public media outlets and public communications infrastructure; she’s serving as the lead organizer for the first coast-to-coast observance of National Radio Day in partnership with non-commercial radio stations across the United States.

o    The tower is a symbolic icon for seven new hyper-local neighborhood radio stations in the process of building low-power FM community-owned and operated media outlets to serve 90% of Seattle’s neighborhoods.

o    The public is invited to get on the radio and talk about how low-power FM could help Seattle communities.
o    Special guest interviews and programming will be announced closer to National Radio Day.

o    Copies of map and information on how to volunteer and support these new hyper-local neighborhood stations are distributed to the public.
o    Individual coverage maps for all seven new Seattle radio stations are displayed.

Youth from CADMA and youth from Hollow Earth Radio will take over the pop-up radio station. Special guests for National Radio Day will be announced closer to the event.

Open to the public.

A way for Seattle to celebrate National Radio Day, and an opportunity to educate the public on the potential for power and influence they now control with these new media outlets.

Sabrina’s mission as a Doer is working on building capacity for the tools and infrastructure for more equitable community development -- public media and municipal broadband. For more information,
go to http://community.brownpapertickets.com/Doers/radio.html.

Doers are Brown Paper Tickets’ unique expression of giving back to communities with a human resource – a person to inspire, provoke thought and creative solutions, to provide leadership on initiatives as well as the connections and even the hands-on assistance to make them happen. Read more at: http://community.brownpapertickets.com/press/.

EDITOR’S NOTE: In-person, in-studio interviews with Sabrina Roach and representatives from any of the participating radio stations, high-resolution photos, coverage maps for each of the seven new radio stations, a Seattle coverage map showing the 90% of city neighborhoods that will be served, and a video of Sabrina’s 2013 National Radio Day event are available. Contact Barb Morgen at 206.883.9093 or email barb(at)brownpapertickets(dot)com.

#NationalRadioDay will be celebrated by non-commercial radio stations and their listeners in more than 30 cities across the nation on Thursday, Aug. 20. Find local events at www.NationalRadioDay.com.