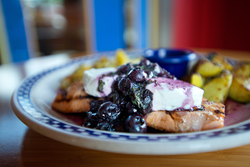 Our goal is to involve our guests and others in the process of launching the cookbook. We want people to be as excited as we are about trying the recipes, and hope we can spark the same creativity and passion at home that we have for sustainable seafood.

Duke’s Chowder House announced today that it will be hosting an online sweepstakes in which it will be releasing previews of recipes from its upcoming cookbook, As Wild As It Gets . . . Duke’s Secret Sustainable Seafood Recipes Including Intimate Tales of the Legend Himself. Scheduled for release this fall, contest entrants will have access to try several recipes before the book hits the shelves–with the chance to win a signed copy of the book, a $50 gift card good at one of Duke’s six locations and a grand prize entry into the cookbook release party, Duke's Sustainable Seafood Shindig (fall, 2015).

To enter the contest, which launches Saturday August 15, 2015, entrants are given a preview of the recipe to recreate at home, and then required to post a picture of their culinary creation to Facebook, Twitter or Instagram with the hashtag #RECREATEDUKES for a chance to win. Ultimately, all winners will be entered into a random drawing and one Grand Prize Winner will be selected to also receive a special invitation to the cookbook release party in the fall.

All in all, three recipes will be revealed (one per week), for a total of three weekly winners–one of which will be awarded the Grand Prize during the contest finale. Duke designed the sweepstakes to provide foodies, home chefs and hobbyists alike with a fun opportunity to try one of Duke’s renowned recipes before everyone else, as well as to offer feedback on how they enjoyed the process of following the recipe and satisfaction with the end product–one of Duke’s delectable dishes.

As a well-known, award-winning restaurateur in the Puget Sound area, Duke’s Chowder House Owner Duke Moscrip, Executive Chef “Wild” Bill Ranniger and son and partner, John Moscrip are thrilled to be releasing their first hardbound cookbook this fall. “Our goal is to involve our guests and others in the process of launching the cookbook. We want people to be as excited as we are about trying the recipes, and hope we can spark the same creativity and passion at home that we have for sustainable seafood,” commented Duke.

The book, As Wild As It Gets . . . Duke’s Secret Sustainable Seafood Recipes Including Intimate Tales of the Legend Himself, will feature a mix of favorite dishes co-created by Duke and Executive Chef, “Wild” Bill Ranniger –all secret recipes never revealed to the public before now. Moreover, the most unique and exciting aspect of the book are Duketales, featured stories providing readers with a glimpse of Duke’s Alaskan adventures as well as stories of Duke’s mischievous promotions over the last 40 years. This cookbook promises to be a rewarding addition to anyone’s culinary literature.

The #RECREATEDUKES sweepstakes begins Saturday, August 15, 2015 and ends with the announcement of the Grand Prize Winner on Monday September 7, 2015. Contestants are required to post a picture of their dish after recreating the recipe to one of the eligible social platforms by Thursday at noon each week to be considered for the weekly prize. Weekly winners will be announced on 8/22, 8/29 and 9/5, notified by email. Only posts that include the hashtag #RECREATEDUKES in conjunction with an image reflecting that week’s recipe will be considered for entry.

About Duke’s Chowder House:
Duke’s Chowder House is a family owned and operated enterprise with six different locations throughout the Puget Sound region. Renowned for its Award Winning Clam Chowder, Duke’s menu is filled with delectable seafood dishes crafted by Duke and Duke’s very own Executive Chef “Wild” Bill Ranniger–a proclaimed culinary genius in the region. Founder and Owner Duke Moscrip – together with his son and partner John Moscrip – continue their passionate journey to source all wild, natural, healthy and fresh tasting ingredients. Duke’s food is free of hormones, antibiotics and harmful chemicals. Duke’s is an upscale, casual Pacific NW seafood concept offering signature, flavorful, 100% sustainable wild seafood, Award Winning Chowder and grass fed burgers. Guests sum up their favorable assessment of what Duke’s Chowder House has to offer with three words: “It’s sooo good!” Duke’s is honored to have received the highest seafood restaurant rating in the State of Washington by Fish2Fork, a leading evaluator of worldwide seafood restaurants, garnering a 4.5 out of 5 (no higher rating in the world). Duke's is equally honored to be among the first restaurants in Seattle to be recognized with a 100 percent volume compliance sustainable seafood rating from Smart Catch, a program designed to promote sustainability and raise consumer awareness regarding sustainable seafood options. Learn more and join Duke's VIP club at http://www.dukeschowderhouse.com/email-club/.