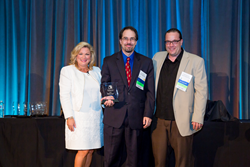 These nominees are making great strides to improve security, risk and privacy not only for their own organizations, but the industry as a whole...

The ISE® West Project of the Year winner was Janus for the project “ElasticSearch Security Visualization Engine,” which was used to pull in relevant security log information and provide an interface to rapidly search security relevant information. The project had zero dollar cost in software licensing and reduced incident response times by fifty percent.

“We were pleased to see executives and projects representing the Western region from Seattle to Denver to San Diego,” said T.E.N. CEO and President Marci McCarthy. “These nominees are making great strides to improve security, risk and privacy not only for their own organizations, but the industry as a whole.”

Our distinguished ISE® Judges are past nominees representing a cross section of industries, including commercial, government, health care and academic sectors. For this reason, the ISE® Awards represent the best achievements of the year as evaluated by those regarded as the industry's most influential and successful thought leaders. Coupled with a one or two-day executive forum or leadership summit, the ISE® Awards are held across the country and Canada in major cities including Atlanta, Chicago, Dallas, New York and San Francisco. The ISE® Awards Program Series has reached more than 10,000 executives across a broad range of industries and has been a major influence in executives’ careers, knowledge sharing, and the development of peer-to-peer relationships.