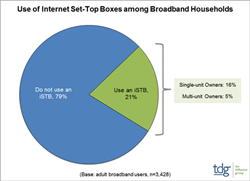 According to a new analysis from TDG, The In-Home CE and Home Networking Ecosystem, 2015, Internet set-top boxes (iSTBs) such as Apple TV and Roku are now present in 21% of US broadband households, up from 13% in early 2014 (an increase in penetration of 63% in the last year).

"20 million US households now use an Internet set-top box to access streaming TV services," notes Michael Greeson, Founder and Director of Research at TDG. "As Apple prepares to launch its new Internet set-top box, it does so knowing demand for such platforms have significant headroom, and will be driven by not only greenfield purchases, but multi-unit and replacement sales, as well."

TDG's research indicates that iSTBs are particularly popular among adult broadband users between the ages of 25 and 44 (29% penetration). By contrast, only one-in-five Late Millennials (18-24s) use an iSTB, with viewers more likely to turn to game consoles than newer platforms.

The In-Home CE and Home Networking Ecosystem, 2015 examines via primary research the consumer electronic and personal computer ecosystem in the homes of US adult broadband users, specifically in terms of the types of devices present; the location of these devices in the home; and their connectivity status.

For more information about TDG's new report, please contact our sales team at sales(at)tdgresearch(dot)com or 469-287-8050.

About TDG Research
TDG provides actionable intelligence on the quantum market shifts impacting consumer technology and media behavior. Since 2004, our market research and advisory services have helped technology vendors, media companies, and service providers understand how consumers access, navigate, distribute, and consume broadband media -- whenever and wherever they may be. For more information, visit our website at http://www.tdgresearch.com.