Experience some of the earth's most sacred sites featuring artifacts from around the world. Artifacts include: fragments of the Dead Sea Scrolls, statue of Hindu god Ganesh, 1,500 pound stone from the Western Wall, Brigham Young's trunk and a sand mandala created on site at The Children's Museum of Indianapolis by Buddhist monks. 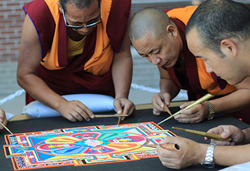 Families will have the opportunity to learn about pilgrimages, festivals & important objects connected to a variety of sacred sites in the world... an excellent stepping off point for families to discuss their own religious paths.

The United States is home to followers of hundreds of religious faiths, yet few know much about their neighbors’ beliefs, practices or traditions. National Geographic Sacred Journeys, a new exhibit, will change that. It opens Aug. 29, 2015 at The Children’s Museum of Indianapolis.

Each year more than 330 million people around the world journey to sacred places as part of their religious commitments. Some seek enlightenment or healing. Others perform acts of devotion that are expressions of deep faith. The new exhibit reflects this diversity of religious and spiritual pilgrimage through immersive environments created with photography from National Geographic. Families will be able to observe, discuss, and begin to understand some of the beliefs and sacred journeys made by people around the world.

Recreated places, spaces, and events will invite visitors to learn more about the history and beliefs that support spiritual practices that take place at home and within congregations. Featured sites include:

The exhibit will come to life through the personal stories of children and families who participate in sacred journeys or practices. Connecting with these experiences will allow visitors to learn how pilgrimage and revered artifacts reflect religious traditions and the cultures associated with those religions.

Among the artifacts featured in the 7,000-square-foot exhibition are fragments of the Dead Sea scrolls from Qumran, Israel, a large 1,300 pound stone from the Western Wall in Jerusalem, Jewish devotional objects taken into space by former astronaut David Wolf, the trunk Brigham Young carried from New York to Utah, a piece of the Kiswah (a gold-embroidered fabric, which drapes the Kaaba in Mecca), a throne built for the Dalai Lama’s U.S. visit in 2010, a sand mandala created by Buddhist monks at the museum, a replica of the Shroud of Turin, and Ganesh statue (Hindu god of good fortune).

“People travel the world in search of transformative experiences, whether they journey to perform acts of faith, pursue enlightenment, or seek healing. Those who seek to understand the motivations for these sacred journeys develop an awareness of cultural diversity and respect for religious traditions,” says Dr. Jeffrey H. Patchen, president and CEO, The Children’s Museum of Indianapolis. “Children and families will have the opportunity to learn about pilgrimages, festivals and important objects connected to a variety of sacred sites in the world. These smaller, intimate displays will focus on stories of personal experiences and will be an excellent stepping off point for families to discuss their own religious paths.”

Funded through a $1.25 million grant from Lilly Endowment Inc., the ground-breaking exhibition builds on the museum’s commitment to help children and their families learn about the world around them, said Dr. Christopher L. Coble, vice president for religion at Lilly Endowment. “We live in one of the most religiously diverse nations in the world, so it is important that we find ways to understand and respect the beliefs of our neighbors,” Coble said.

Creating the exhibit, staff of The Children’s Museum of Indianapolis worked closely with local religious leaders and a national panel of academic scholars, who are experts in the fields of humanities, theology, world cultures, and religious studies. The advisors shaped exhibit content to ensure that the most authentic artifacts, texts and other exhibit elements were selected and portrayed in the appropriate manner so they may be understood by families who come to the exhibit with diverse perspectives.

“The sharing of these personal journeys will offer families an opportunity to learn about the customs and beliefs of their neighbors and about religion in America,” says Professor Raymond Williams, LaFollette Distinguished Professor in the Humanities emeritus and Professor of Religion emeritus at Wabash College as well as the chairman of the exhibit’s advisory committee.

“For more than 125 years, National Geographic has been documenting the world and its many cultures,” said National Geographic’s vice president of exhibitions, Kathryn Keane. “This exhibition is another incredible journey for families to some of the world’s most sacred and historic places.” The traveling exhibit was created by The Children’s Museum of Indianapolis in collaboration with the National Geographic Society and is made possible by a generous support from Lilly Endowment Inc. It will premiere in Indianapolis Aug. 29 and remain open into 2016. It will then travel to another museum venue.

Lilly Endowment Inc.
Lilly Endowment Inc. is an private philanthropic foundation based in Indianapolis that was created in 1937 by three members of the Lilly family - J.K. Lilly Sr. and sons J.K. Jr. and Eli - through gifts of stock in their pharmaceutical business, Eli Lilly & Company. The Endowment exists to support the causes of religion, education and community development. Its commitment to religion includes support for projects that strengthen the public understanding of religion.

National Geographic Society
National Geographic is a global nonprofit membership organization driven by a passionate belief in the power of science, exploration and storytelling to change the world. It funds hundreds of research and conservation projects around the globe each year. With the support of its members and donors, the Society works to inspire, illuminate and teach through scientific expeditions, award-winning journalism, education initiatives and more. For more information, visit http://www.nationalgeographic.com and find it on Facebook, Twitter, Instagram, Google+, YouTube, LinkedIn and Pinterest.

The Children’s Museum of Indianapolis
The Children’s Museum of Indianapolis is a nonprofit institution committed to creating extraordinary learning experiences across the arts, sciences, and humanities that have the power to transform the lives of children and families. For more information, please visit childrensmuseum.org, and follow the museum on Facebook, Twitter, Instagram, Google+, YouTube, LinkedIn, http://www.childrensmuseum.org.

Hindu god Ganesh at The Children's Museum of Indianapolis as part of National Geographic Sacred JourneysAfter the statue of Ganesh is submerged in water, some believe the Hindu god grants worshippers good fortune.

Gold embroidered Kiswah cloth is one of the artifacts on display at The Children's Museum of Indianapolis as part of National Geographic Sacred JourneysThe Islamic faith requires followers to complete the Hajj at least once in their lifetime. This real piece of Kiswah curtain was once part of the Kaaba’s black fabric covering.

Xray images like this helped scientists take a close-up look at the image on the Shroud of TurinSome believe the Shroud of Turin is an old linen cloth that bears the image of Jesus Christ in which he was wrapped and buried. A replica of the Shroud is on display with this xray image at The Children's Museum of Indianapolis.

Bodhi Tree experience at The Children's Museum of Indianapolis is part of National Geographic Sacred JourneysThe first teacher of Buddhism became the Buddha under the Bodhi Tree at the Mahabodhi Temple.